Bahrain has ordered the closure of the country's main secular opposition group. Rights groups described the move as the latest crackdown on all opposition voices. 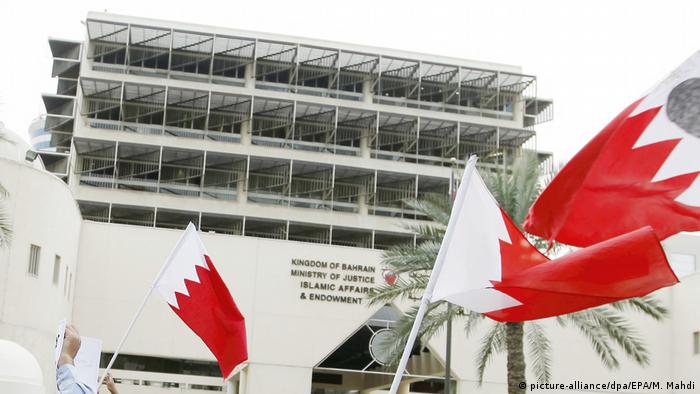 A court in Bahrain on Wednesday ordered the largest secular opposition group to dissolve and its assets seized for supporting terrorism and failing to recognize the constitution.

The closure of the National Democratic Action Society (Waad) is the latest blow to dissenting voices in the Sunni-led kingdom, which has cracked down on the Shiite majority and pro-democracy reformers since the 2011 Arab Spring uprisings.

The court said Waad glorified as "martyrs of the homeland" three men who were executed earlier this year for a 2014 bomb attack that killed three police officers, according to the Bahrain News Agency.

the court also said the social and political association showed solidarity with the country's largest Shiite opposition group al-Wefaq, which was dissolved last year for organizing protests and "harboring terrorism."

Waad said it plans to appeal the court ruling.

Amnesty International called closing Waad the latest move to clamp down on all criticism of the government.

The London-based Bahrain Institute for Rights and Democracy said by silencing legitimate opposition the government's policies would backfire.

"Shutting down the last opposition party is a declaration of a de facto ban on all opposition. The government of Bahrain is acting with the aim of totally silencing all peaceful voices, leaving open the alternative of underground opposition and violence," said Sayed Ahmed Alwadaei, the group's director of advocacy.

"This was allowed to happen because Bahrain feels zero geopolitical and international pressure from 'champions of democracy' in the West," he added.

Waad's closure comes a week after five people were killed and 286 arrested in a police raid on a protest in the hometown of Bahrain's Shiite spiritual leader Ayatollah Isa Qassim, who had his citizenship was revoked and faces deportation.

Bahrain, a Shiite majority country ruled by a Sunni monarchy, has cracked down on dissenting voices since Arab Spring protests were put down after Saudi Arabia and the United Arab Emirates intervened.

Authorities have since accused Shiite Iran of supporting dissent and terrorism to destabilize the kingdom. Tehran denies the charges.

Earlier this month, US President Donald Trump described relations with Bahrain as "wonderful" during a visit to Saudi Arabia, where he downplayed human rights issues and sought regional alignment against Iran.

Bahrain is home the US Fifth Fleet, but concern over deteriorating human rights had strained relations during the Obama administration.

Trump has approved a multi-billion dollar F-16 fighter sale to Bahrain that was scrapped by the previous administration over human rights concerns.