Baghdad, Jerusalem, Aachen -- On the Trail of the White Elephant | Culture| Arts, music and lifestyle reporting from Germany | DW | 21.07.2003

Baghdad, Jerusalem, Aachen -- On the Trail of the White Elephant

1,200 years ago three men set off on a journey from Europe to the Middle East and back. Today their trip across three cultures and religions is recreated in the Aachen exhibit "Ex Oriente: Isaac and the white elephant." 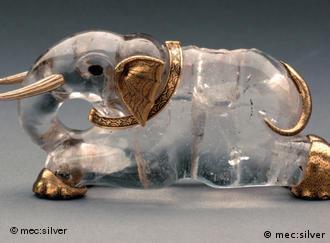 In 802, a Jewish merchant brought back a white Indian elephant from Baghdad to the court of Charlemagne in Aachen.

Baghdad and Jerusalem. Today the cities conjure up images of armed conflict and religious strife. For many they are the epitome of the collision between the Orient and Occident, the battlefields of global interests, where the foreign other is so different and distant from Europe. But a thousand years ago the cities represented the pinnacle of cultural and religious symbiosis and were the choice destination for one of history’s lesser-known but certainly more interesting journeys.

The year was 797 in the Christian calendar (4557 in the Jewish and 175 in the Muslim dating system). Charlemagne, King of the Francs, had sent forth two of his envoys and the Jewish merchant Isaac to the court of Harun al Rashid, Caliph of Baghdad. Their mission: establish contact with the ruler of the Abbasids and observe the ways of the city on the Euphrates. Compared to the town of Aachen with its 400 some residents, Baghdad was a flourishing metropolis, a renowned place of learning and a melting point for various cultures and religions.

When the envoys departed from Charlemagne’s court in western Germany, the distant lands of the Orient were still largely unknown and exotic. The envoy’s route led them first to upper Italy, then by ship to the holy city of Jerusalem, and from there to Baghdad, the seat of the Abbasid Caliph. All in all, the men traversed a good portion of the known world at the time, passing through the territories of the three great monotheistic religions: Christianity, Judaism and Islam.

After several months in Baghdad, the men embarked on their return journey, laden with gifts, the most impressive of which was a white Indian elephant, Abu Abbas – a symbol of friendship from the Muslim caliph to the Christian king. But because the pachyderm was so much slower than a horse, the return voyage turned into an arduous four-year adventure along the southern Mediterranean from Jerusalem to Carthage, where Isaac – who was now traveling alone – and Abu Abbas set sail to Italy. In the spring of 802, Isaac crossed the Alps on elephant-back and rode on to Aachen in the Kingdom of the Francs.

Today, the story sounds like something straight out of "1001 Arabian Nights" and indeed the historical circumstances of the journey are somewhat clouded in legend. Charlemagne’s own court chronicler Einhart is unusually vague about the envoys’ journey. Only the return of Isaac and the white elephant and their festive reception in Aachen’s coronation hall on July 20, 802, were dutifully recorded in the annals of history. The rest is left largely up to speculation. Whether or not the men actually stayed at Harun al Rashid’s palace in Baghdad, what observations they made and which route they took on their round-trip voyage is still a point of discussion for historians. Near certain, however, is that the entire journey took five years and connected two worlds, the Orient and the Occident.

It is this centuries-old bridge between the cultures, the link between different religions that serves as the thematic compass for the current exhibit in Aachen "Ex oriente: Isaac and the white elephant." The historical journey from Baghdad to Aachen via Jerusalem winds its way like a red carpet through the exhibit space, guiding visitors through geographically separate locations in Aachen, each intended to "recreate" one of the three cities.

Ex oriente’s overriding themes of inter-cultural dialogue, reciprocal influences and demarcations are superimposed on the rather sketchy historical timeline sprinkled with artifacts garnered from various periods and places along the white elephant’s route.

From medieval maps, books and religious manuscripts to tapestry, pottery and jewelry, the exhibit seeks to conjure up the era of Charlemagne and the spirit of the journey while juxtaposing it with the tensions of the present day through contemporary art work interspersed throughout the display area. Thus, the visitor is led on a journey through time and space but is at every step of the way conscious of present day limitations, boundaries, and conflicts.

In fact, the visitor is never able to escape these modern road signs, despite the exhibit’s attempts to encourage otherwise. At numerous points on the journey, the visitor is encouraged to "experience the feeling" of Baghdad, Jerusalem and Aachen around 800, to relive the cultural exchange and the intense blending of various ethnic and religious groups – and yet this is nearly impossible. At the intersection between cultures, video screens point out that today’s trade with the Orient rests largely on oil and drugs and that the ancient pilgrimage routes are today’s border crossings for refugees and illegal aliens. Over-sized paintings recall the decades of conflict in the Middle East while photo montages and installations offer a running commentary on the collision of the religions and the failure to find a lasting peace.

As the exhibit itself proclaims, the combination of historical and contemporary objects intends to provoke the visitor to ask questions about his or her own cultural background and to think about ways to recreate, or better yet emulate, Isaac’s cultural mission of observing, appreciating and respecting the other.

Unfortunately, the visitor leaves wanting to have other more mundane questions addressed like how the elephant survived the northern climate, what political connection Charlemagne had with Harun al Rashid and why Isaac’s journey never warranted more than a footnote in history books.

But then again maybe these rather pointed historical questions can serve as the departure point for further investigations into inter-cultural history, because such travels certainly weren’t limited to Charlemagne’s period. And in the end it might just be the curious pursuers of historical facts who, in the exhibit’s frequently quoted words of Aristotle, wonder and marvel and thereby create the basis for all quests of knowledge and understanding. In the case of "Ex oriente," it is the visitor who leaves the exhibit enchanted with the concept of documenting a 1,200 year old journey and questions its relevance to today's realities.

"Ex oriente: Isaac and the white elephant" runs through Sept. 28 in Aachen's town hall and cathedral.

Information on the exhibit in Aachen -- in German only.