Austrian Chancellor Kurz confirms he is under investigation, denies wrongdoing | Europe | News and current affairs from around the continent | DW | 12.05.2021 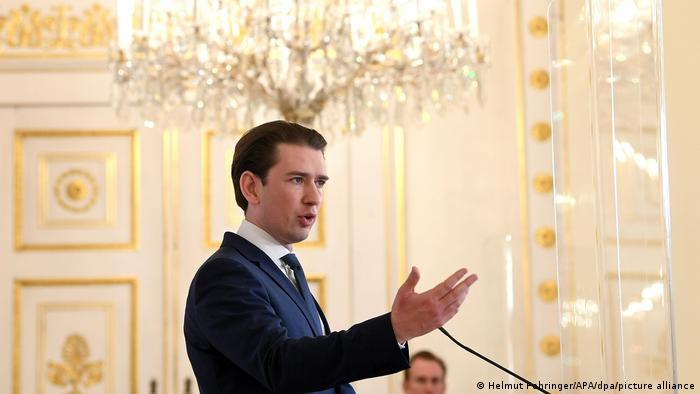 Chancellor Kurz, known as the wunderwuzzi (whiz kid) at home, is confident corruption charges against him will be dropped

Austrian Chancellor Sebastian Kurz on Wednesday confirmed that he and Gerhard Bonelli, his chief of staff, are both under investigation by anti-corruption prosecutors . He is being investigated for possible false statements made to a parliamentary commission investigating the so-called "Ibiza Affair" — a sting video that brought down the former government and forced new elections.

"I knew there was a legal requirement to speak the truth in the commission and therefore of course always answered [questions] truthfully," Kurz told reporters in Vienna. The young chancellor said he was confident he would be proven innocent.

At issue is whether Kurz misled commission investigators while testifying about political appointments that were discussed in the Ibiza video.

Though Kurz has denied any involvement in the 2019 appointment of his close confidant Thomas Schmid as CEO of OBAG, which manages Austria's holdings in a number of companies including the oil company OMV, the parliamentary commission is reportedly in possession of text messages between the two men that suggest the opposite, including one in which Kurz promises Schmid "everything you want" before his appointment.

Austria's Prosecutors' Office for Economic Affairs and Corruption (WKStA) confirmed its perjury investigation, saying, "It is regarding the allegation that a false statement was made before the Ibiza commission of inquiry in connection with the establishment of OBAG."

What is the Ibiza Affair and what does it have to do with Kurz?

The source of Kurz's grief stems from the bombshell sting video that blew the lid off the so-called Ibiza Affair. The video was recorded in 2017, shortly before Kurz took office and ultimately brought down the governing coalition between Kurz's Austrian People's Party (OVP) and the far-right Freedom Party of Austria (FPO) and forced new elections after it was made public in May 2019.

In the video, FPO leader Heinz-Christian Strache, who would later become vice chancellor under Kurz, was recorded alongside deputy party leader Johann Gudenus as the two met with a woman claiming to be the niece of a Russian oligarch at a villa on the Spanish island of Ibiza. An interpreter for the woman, as well as Gudunus' wife were also present.

The video captured the men drinking heavily and discussing the possibility of awarding lucrative government contracts to the woman in exchange for her help in providing positive media coverage ahead of upcoming parliamentary elections if she were able to successfully purchase the Kronen Zeitung, an Austrian tabloid.

Strache and Gudunus also suggested the woman could make political donations via secret accounts, claiming others had already done so. Strache later denied any illegal activity and said that he had been talking nonsense in his drunken state. He eventually stepped down from his post and Kurz ended the coalition shortly thereafter.

Walls closing in but Kurz says he's not going anywhere

The repercussions still reverberate today with a number of high-level conservative politicians either having stepped down or being investigated.

Among the government contracts discussed in the video was one involving the gaming industry company Novomatic. In February, Kurz's closest political ally, Finance Minister Gernot Blümel, was also placed under investigation on suspicion of bribery involving Novomatic payments to the OVP in exchange for helping the firm avoid foreign tax liabilities. Blümel has denied any wrongdoing and has refused to resign his post.

In his statement to journalists Wednesday, Kurz accused the parliamentary commission of trying to twist his words and force him into perjuring himself. If found guilty, he could face three years in prison.

Despite the cloud of corruption allegations that hangs over the young politician, he and his party have retained a commanding lead in opinion polls. On Wednesday, Kurz said he has no intention of leaving office, no matter what investigators may find.