Sebastian Kurz: Austria′s once and likely future chancellor | Europe | News and current affairs from around the continent | DW | 29.09.2019

Sebastian Kurz was the youngest head of government in the world during his tenure as Austria's chancellor. Now he's on track to govern again. DW looks at his rise to power and an 18-month term that ended in scandal. 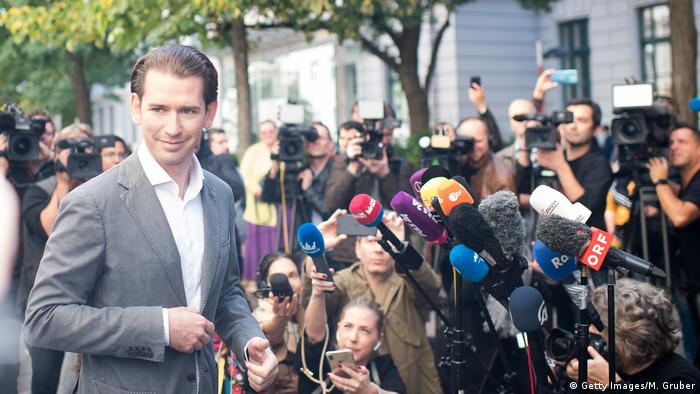 Austria's Sebastian Kurz looks unlikely to remain "ex-chancellor" for long, with preliminary results after elections on Sunday putting his conservative People's Party (ÖVP) clearly in first place, with just over 37% support. All signs are pointing to the 33-year-old becoming the world's youngest head of government again.

Kurz resigned in May after the "Ibiza affair" engulfed the ÖVP's coalition partner, the far-right Freedom Party (FPÖ). However, the young leader was able to maneuver himself quickly out of the line of fire of public outrage and has pretty much been back on the campaign trail ever since.

His determination to remain on the national stage would not come as a surprise to anyone who has followed Kurz's career, which was already hot when he joined the ÖVP's youth wing at 17 as the protege of a well-known Viennese lawmaker.

His hard work paid off, as the traditionally Social Democratic (SPÖ) stronghold of Vienna began to turn more conservative, and the ÖVP rewarded Kurz by appointing him state secretary for integration in 2011. Two years later, when an SPÖ-ÖVP coalition was formed after Austria's general election, Kurz took another giant leap forward — becoming the youngest foreign minister in Europe at only 27 years old.

Long-running speculation that Kurz would take over as the leader and top candidate came to pass in May 2017, as the party geared up for next national vote. He quickly went about reshaping the ÖVP in his image, rebranding Austria's oldest political party as the "Sebastian Kurz List" and changing its color from black to the more "millennial" turquoise.

Kurz's zeal was seen as decisiveness and strong leadership by many, and the ÖVP rode his popularity to victory in October 2017, gaining 15 seats in the National Council.

With the SPÖ refusing another four years of coalition with the conservatives, Kurz teamed up with the FPÖ, a decision that concerned many, as the populist FPÖ was led early on by former Nazi officials, and over the years has been tied to numerous anti-Semitic scandals.

The FPÖ proved to be the perfect instrument for Kurz's government to impose draconian anti-immigrant measures while allowing Kurz to present himself as a center-right leader in the style of German Chancellor Angela Merkel.

It was his vice-chancellor, FPÖ leader Heinz-Christian Strache, who met with other ethno-nationalists and figures like Hungary's Viktor Orban and Italy's Matteo Salvini. And it was the FPÖ that became the face of hard-line policies that restricted the rights and benefits afforded migrants, such as demanding they hand over valuables at the border. Kurz, meanwhile, took credit for promoting tax cuts, digitalization of government services, and wider social benefits for native-born Austrians.

During his time in office, Austria held the rotating EU presidency from July to December 2018, during which time advocated for stronger border controls and for banning privately run migrant rescue ships from Europe.

While a boon in some arenas, the FPÖ was also a thorn in Kurz's side. Banned by Israel for its history of anti-Semitism, his foreign minister, Karin Kneissl, could not get meetings with most high-ranking Israeli officials. During his 18 months in office, several FPÖ lawmakers were tied to neo-Nazi fraternities, including a top candidate for the Lower Austria region, Udo Landbauer, who had to step down over evidence he had taken part in the singing of fascist, anti-Semitic songs.

Kurz's problems with the FPÖ came to a head in May 2019, when German media published video of Strache in a villa on the Spanish island of Ibiza, shot shortly before the 2017 elections, promising a woman posing as the niece of a Russian oligarch lucrative government contracts in exchange for positive news coverage of their campaign.

The chancellor immediately distanced himself from the entire affair, and the FPÖ joined left-leaning parties in supporting a no-confidence vote against him on May 27, costing him his job. Kurz then asked President Alexander Van der Bellen to call a snap election.

Whether Austria will repeat the tensions of the conservative-populist alliance remains to be seen, although surveys suggest it is the combination most favored by voters. Kurz has also not ruled out forming the same coalition — though he has said it would be without the former controversial interior minister, the FPÖ's Herbert Kickl, in the Cabinet. The leftist SPÖ is projected to have won around 22% of the vote, making it the second-strongest party, while the FPÖ fell to a projected 16%. Whoever is chosen as partners by Kurz in the end, observers are expecting long coalition negotiations — lasting possibly into next year.

Austria's parliament has taken advantage of a weak caretaker government to pass long-awaited reforms. However, not everyone is happy with the speed and the cost of these news measures. (05.07.2019)