The government of Austrian Chancellor Sebastian Kurz is to face a vote of no confidence amid a scandal surrounding his far-right coalition partners. The main opposition party has urged its members to support the motion. 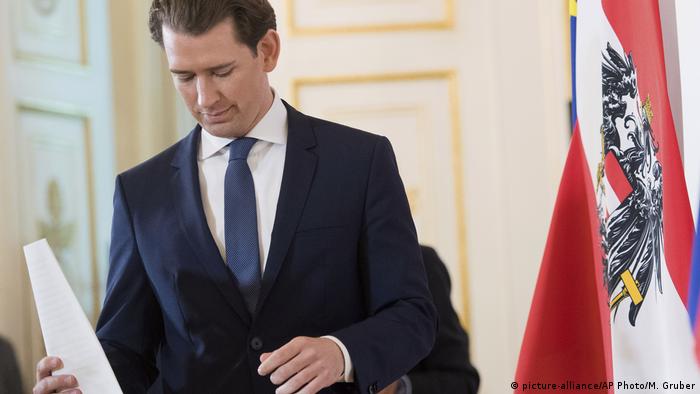 Austrian Chancellor Sebastian Kurz could face the prospect of being removed from office in a no-confidence vote on Monday afternoon, just a day after his Austrian People's Party (ÖVP) scored a surprise success at European elections.

Opposition parties accuse Kurz of being partly to blame for the crisis because of his choice of the FPÖ as coalition partner in the first place. They also say he has failed to seek a viable cross-party solution to the crisis.

The leader of the main opposition Social Democrats (SPÖ), Pamela Rendi-Wagner, said on Sunday evening that the party's presidium had unanimously told its parliamentarians to support the no-confidence motion.

The SPÖ has broadened the initial motion from the leftist Jetzt ("Now") party targeting just Kurz to include the entire government.

The coalition partner FPÖ, whose votes are necessary to keep the chancellor in power, has said it will also "likely support" the motion against Kurz, according to comments by leading party official Norbert Hofer cited by Austrian news agency APA.

The no-confidence vote comes on the heels of success for Kurz' ÖVP at European elections. Projections show the party receiving some 34.5% of votes, an improvement of almost 8% compared to the last polls in 2014.

The video scandal also did little to dent the popularity of the FPÖ, which lost just 2.2 percentage points and scored 17.5%.

Since Wednesday, Kurz has been at the head of a caretaker government, with all posts formerly held by FPÖ or FPÖ-linked ministers taken by technocrats. All far-right ministers resigned in solidarity after the chancellor had Interior Minister Herbert Kickl of the FPÖ dismissed by President Alexander Van der Bellen.

If the no-confidence vote ends in the removal of Kurz, it would be the first time such a motion has been successful in the history of the country.