Prosecutors have announced that the former vice chancellor and members of his party are being investigated for breach of trust. A sting video forced him to step down in May and led to the collapse of the government. 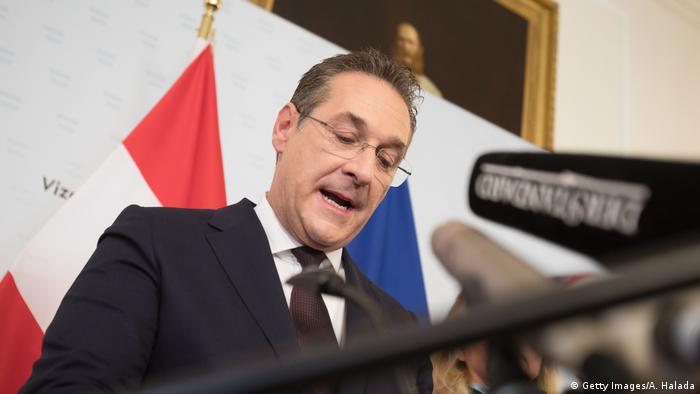 Austrian prosecutors announced Thursday that they are investigating former Vice Chancellor Heinz-Christian Strache as well as Johan Gudenus, Markus Tschank and other members of the far-right Freedom Party of Austria (FPÖ) on suspicion of breach of trust.

The investigation stems from a secret video that surfaced in May, just days before European parliamentary elections.

The bombshell that brought down the government

The bombshell publication of the video, which was recorded on the Spanish island of Ibiza in 2017, before the FPÖ entered the government as the junior partner to Sebastian Kurz and his Austrian People's Party (ÖVP), led to Strache's resignation and shortly thereafter to the collapse of the entire government.

Originally published by Germany's Süddeutsche Zeitung and the weekly magazine Der Spiegel, the video showed Strache and Gudenus offering infrastructure projects and media investment opportunities to a woman posing as a wealthy Russian investor in exchange for positive media coverage.

The investigation is also likely to focus on another portion of the video in which the two men inform the woman about a scheme that would enable her to donate to the party by depositing money with a charitable foundation.

They explain that this will allow her to avoid breaking Austrian campaign finance law as the foundation is not officially linked to the FPÖ. Strache also boasted that a number of wealthy German and Austrian donors had given the FPÖ large sums of money using the scheme. Those individuals denied that they had ever done so.

Prosecutors said they are looking "in multiple directions" in the investigation. They added that they are also looking at "persons unknown," but are interested in Tschank, an FPÖ parliamentarian with ties to a number of organizations affiliated with the party.

From Vienna to Brussels?

Strache resigned as vice chancellor and FPÖ party chairman on May 18, the day after the Ibizagate video, as the video has become known, was made public. Gudenus subsequently left the party.

After the FPÖ was dropped as Kurz's coalition partner, Kurz, too, suffered a stinging defeat by losing a vote of confidence.

Strache was replaced by Norbert Hofer as acting party chairman after he resigned on May 18; however, Strache may yet take up a post in the European Parliament. During the May 26 European Parliament elections, Austrian FPÖ voters chose him as their preferred candidate to serve in one of the party's three seats.