A cluster of COVID-19 cases broke out Wolfgangsee, a popular holiday destination for German and Austrian holidaymakers. Concerns are growing over outbreaks at holiday spots across Europe. 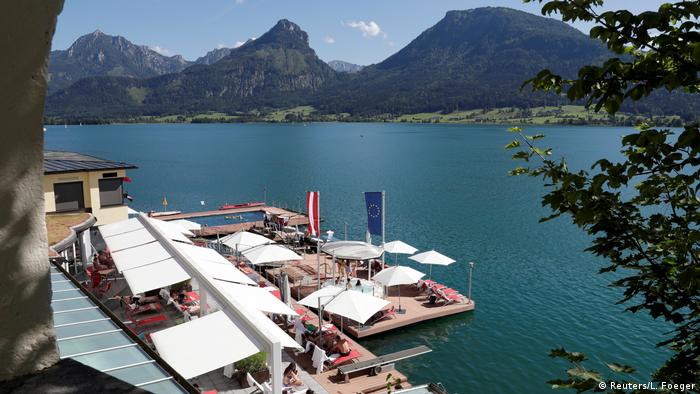 The number of coronavirus infections linked to an outbreak at the scenic Austrian holiday resort of Wolfgangsee has risen to 62, according to health authorities in Upper Austria on Tuesday.

On Monday, authorities reported the outbreak had caused 53 infections.

A group of 16- and 17-year-old hospitality trainees on a summer placement in the area are thought to be at the center of the outbreak, according to Upper Austria's COVID-19 crisis response team.

Following the outbreak in St. Wolfgang, authorities carried out mass COVID-19 testing of over 1,183 people, including guests, hotel staff, and local residents.

Trainees at center of the outbreak

"The cluster in St. Wolfgang started small, as usually happens. In this case, the outbreak was caused by a few young people who got together in the evening," Theresia Schlöglmann, head of the Upper Austrian crisis unit told Austrian public television channel ORF on Monday. The young people were not to blame, she stressed.

In recent weeks, case flare-ups have been reported at other popular holiday destinations in Europe and governments have begun reintroducing various restrictions.

The cluster broke out at Wolfgangsee shortly after Austria reintroduced face mask requirements inside supermarkets, banks and post offices, in response to rising infections.

In response to increased transmission numbers in Spain, the UK imposed a quarantine period for returning holidaymakers.

Germany on Monday made COVID-19 tests at airports mandatory for anyone returning from high-risk areas.