Ministers from 15 countries have agreed to devise measures to ensure that a land route for refugees remains shut. Regional governments also oppose taking in refugees who have already reached the European Union. 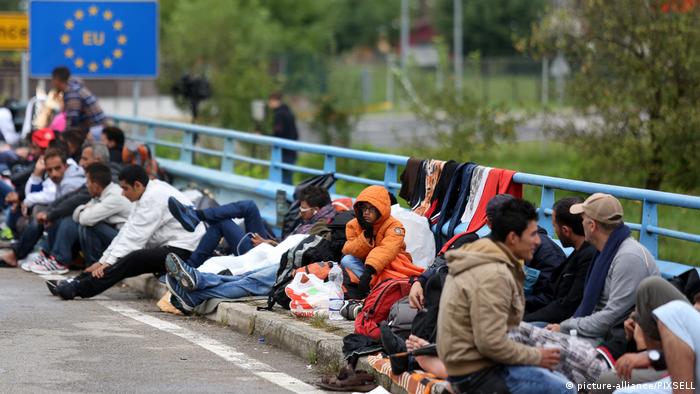 Countries along a route commonly used by people trying to reach central and western Europe agreed on Wednesday to fortify their already hard borders. Since authorities reintroduced border fences and increased checks nearly a year ago, the number of refugees traveling through the western Balkans in attempts to reach northern EU nations from Greece has been sharply curtailed.

"We're sending a signal to the traffickers with this conference that there will be no illegal migration to Europe," Austrian Interior Minister Wolfgang Sobotka told reporters after Wednesday's talks in Vienna. He spoke of new "border control measures" as part of the plan but did not elaborate what the plans entailed.

Talks in Vienna brought together defense and interior ministers from Austria, the Czech Republic, Croatia, Hungary, Poland, Romania, Slovakia, Slovenia, Albania, Macedonia, Bulgaria,Serbia,  Bosnia-Herzegovina, Kosovo and Greece. In 2015, some of those countries became arrival or transit points for the hundreds of thousands of people fleeing conflict and unsustainable conditions in the Middle East, Africa and South Asia.

The conference's participants said they planned to identify the most prevalent routes used by displaced people and any potential alternatives and arrive at an estimate of how much additional manpower they might need to shut the borders down. Sobotka said he and his colleagues would draw up new measures to fortify the borders by April.

Austrian Defense Minister Hans Peter Doskozil said the countries would also need to prepare for the possible disintegration of the European Union's controversial and multi-billion-euro migrant deal with Turkey.

Arriving without authorization via Italy or the Balkans, between 1,000 and 1,500 people applied for asylum in Austria in January. "The situation is not as we envisaged," Doskozil said after Wednesday's talks.