European Commissioner for Migration Dimitris Avramopoulos is visiting Slovenia to discuss the migrant crisis. The small Balkan country has asked for EU police help to regulate the migrant flow. 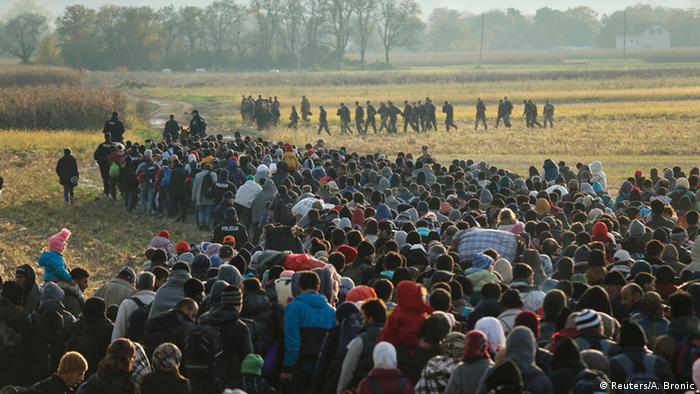 Over the past 24 hours, more than 12,000 refugees have arrived in Slovenia, according to Slovenian police. This record surpasses even the numbers in Hungary at the height of the crisis in September. Slovenia is the smallest country on the Balkan migration route, with only two million inhabitants.

On Thursday morning, more than 1,000 asylum seekers streamed out of a crowded Austrian collection point on the Austrian-Slovenian border after Austrian police removed barriers to prevent possible violence. Police said some followed instructions and regrouped outside the barriers, but many continued walking northward away from the Spielfeld border crossing.

Slovenia voiced sharp criticism over Croatia's decision to open its borders on Monday night, letting thousands of people in Slovenia, on their way north to Austria and Germany.

The situation is tense in Slovenian refugee camps. In Brezice, near the Slovenian-Croatian border, a fire of unknown origin destroyed 27 tents.

European Commissioner for Migration and Home Affairs Dimitris Avramopoulos is visiting Slovenia on Thursday to discuss the migrant crisis and assess the problems of the small Balkan country.

After Hungary sealed its border with Croatia at the end of last week, huge numbers of migrants started coming to Slovenia.

Slovenia's parliament has given more power to the army which is helping police secure the border, while the country also plans to rehire retired police officers to help tackle the migrant crisis. The new legislation allows the army to patrol the frontier even when border police are not present.

In the meantime, Hungarian Prime Minister Viktor Orban urged European leaders to change their immigration policies and involve voters in a debate about the continent's future, saying they would otherwise face a political crisis and a threat to democratic order.

He added that Hungary's border fence had been meant to turn migrants back from Europe, not divert them along a different path to Germany. He called upon his Balkan neighbors to send the refugees back. "The right thing to do is not to ensure their passage into Europe but to take them back to the refugee camps they started out from," he stated.

European Commission chief Jean-Claude Juncker has called a mini-summit for Sunday to tackle the migrant crisis in the Balkans. The meeting comes as Slovenia took drastic measures along its borders to curb the influx. (21.10.2015)

Ljubljana has granted the military the power to patrol the border where police are absent. Slovenia has seen thousands of migrants come through from Croatia just this week. (21.10.2015)