Australia's prime minister has poked fun at US President Donald Trump, parodying his mannerisms and citing his ties to Russia, in a tape leaked to the media. Malcolm Turnbull condemned the leak as a "breach of faith." 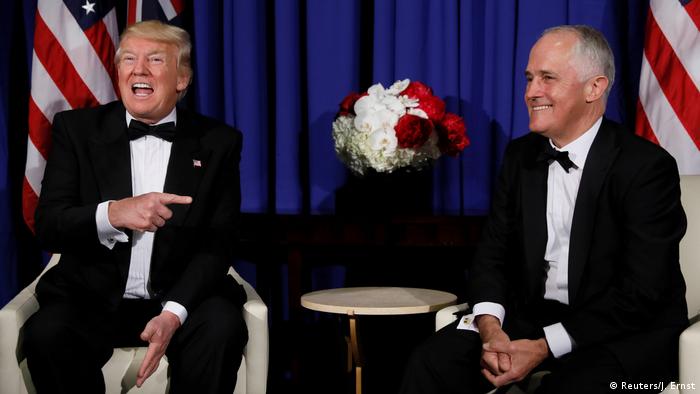 The tongue-in-cheek routine was part of an off-the-record speech Turnbull delivered at an annual media ball at Parliament House in Canberra on Wednesday night.

"We are winning... not in the fake polls. We are winning in the real polls, like the online polls. They are so easy to win. I know that. I have this Russian guy. Believe me, it's true," he added, alluding to the scandal over the Trump administration's purported ties to Russia.

Turnbull and Trump got off to a rocky start, with Trump describing their first telephone call in January over a refugee deal as "testy." Trump cut the conversation short and later tweeted that the refugee agreement, secured by his predecessor Barack Obama, was "dumb." When Turnbull traveled to New York to visit the US leader last month, they declared before the media that they "get along great" - although Trump was several hours late to their meeting and then cut it short.

"It was beautiful. It was the most beautiful putting-me-at-ease ever," Turnbull says in the recording, which appears to be filmed using a smartphone.

Wednesday night's ball, organized by the Federal Parliamentary Press Gallery, is strictly a closed event, meaning journalists do not typically report on what is said. Both Turnbull and the press gallery hosts expressed disappointment that guests had not complied with the non-publication request for the speeches.

"It's a breach of protocol, it's a breach of faith and all those things," Turnbull told Melbourne Radio 3AW. "But you know, it's light hearted, it's affectionate, good natured and the butt of my jokes was myself."

Laurie Oakes, the veteran journalist who reported the speech, said he didn't attend the ball, and didn't accept that reporting should be banned at a function hosted by journalists.

"The idea that there be no leak with hundreds of people in the room armed with mobile phones is just ridiculous," he said.

In a statement cited by Channel Nine, the US Embassy in Canberra said they could appreciate the speech's comedic value.

"We understand that last night's event is equivalent to our own White House Correspondents' Dinner," it read. "We take this with the good humor that was intended."

Chinese premier Li is currently in Australia to strengthen bilateral ties. Both nations see their partnership as primordial to present a unified stance against the protectionist tendencies sprouting up around the world. (24.03.2017)