She played the cello – and survived the Holocaust. Anita Lasker-Wallfisch is one of the last contemporaries who can personally tell of life at Auschwitz.

Can artistic endeavors give meaning to life, change it or even save lives? A clear and affirmative answer is given by the example of musician Anita Lasker-Wallfisch, who was once a cellist in the girls' orchestra of the Auschwitz concentration and death camp.

"Racism hasn't died out, unfortunately, but as members of the human race we are responsible for one another," says Lasker-Wallfisch. "Nobody entered the world wearing the label 'superhuman' or 'subhuman.' We are the ones who invented these labels."

The Holocaust survivor was honored in September 2019 with the German National Prize, endowed with €30,000 ($34,000), for her commitment to humanistic values and tolerance.

Referring to the growing number of anti-Semitic incidents in Germany in recent years, Lasker-Wallfisch however admitted her pessimism: "When fighting against anti-Semitism, you feel like an ant that wants to climb Mount Everest — simply powerless," she said at the award ceremony.

Passing on the truth

Lasker-Wallfisch became an outspoken peace advocate relatively late in life. In 2018, she gave a commemorative speech in the German parliament to mark the 73rd anniversary of the liberation of Auschwitz. But for decades, she had refused to talk about her childhood in Germany or her years in detention at Auschwitz and Bergen-Belsen —  even to her own children. Then, in the early 1990s, she wrote her memoirs, Inherit the Truth, and began regularly visiting Germany, a country she had long refused to set foot in, often telling her story to schools.

It is a story of flight, imprisonment, forced labor, making music under the most trying circumstances, emigration and, finally, a career in music.

Now 95, Anita Lasker was born on July 17, 1925 into a German-Jewish family in Breslau (today Wroclaw, Poland). Her father was a lawyer and her mother a violinist. The family had no illusions about the designs of the Nazi regime and successfully got Anita's oldest sister Marianne to safety in England in late 1939. The parents were deported in 1942; Anita was 16 and never saw them again. 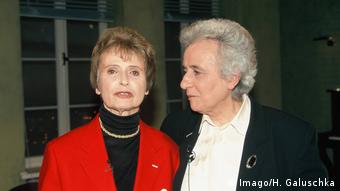 Entering an orphanage, Anita and her sister Renate were working in a paper factory and thus not immediately deported themselves. There they began forging papers to enable French forced laborers to cross back into France.

"I could never accept that I should be killed for what I happened to be born as, and decided to give the Germans a better reason for killing me," Lasker-Wallfisch would later say.

When the sisters themselves tried to escape to France with forged passports in June 1943, they were arrested at the train station and sentenced to prison. Five months later, Anita, then 18, and her sister were deported separately to Auschwitz. Her stay in jail turned out to have been a blessing in disguise. She traveled on a prison train and thus separately from the people who were generally sent straight to the gas chambers on arrival.

"We were fortunate to have been classified not as Jews but as criminals," Lasker-Wallfisch said years later during a speech in Bergen-Belsen.

After mentioning that she could play the cello, young Anita was inducted into an orchestra of prisoners led by Alma Rose, Gustav Mahler's niece. "The cello saved my life," she later said. The orchestra played marches as enslaved laborers left the camp in step for work every morning and when they returned in the evening. On Sundays, the girls performed for the SS. 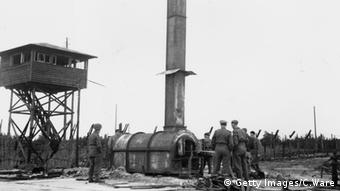 In a way, conditions were much worse at the Bergen-Belsen concentration camp

In November 1944, with Soviet troops approaching Auschwitz, Anita and her sister were sent to the camp at Bergen-Belsen. "None of us ever believed we'd actually leave Auschwitz some other way than through the chimney," she later said.

That moment summed up life in Auschwitz: "We didn't know from one day to the next whether we would live. People disappeared all the time. Even the way we were deported to Bergen-Belsen — 10 minutes before, nobody knew we'd be sitting in cattle cars."

At the drastically overcrowded Bergen-Belsen, conditions were much worse. Many people died of malnutrition, and Lasker-Wallfisch witnessed instances of cannibalism. "Auschwitz was a camp where people were systematically murdered," Lasker-Wallfisch later wrote in her memoirs. "In Bergen-Belsen, they just died." Even there, however, music was made: Anita played in a group of 11 female musicians from the former Auschwitz orchestra.

After British troops freed the camp on April 15, 1945, Lasker-Wallfisch was a witness in the Bergen-Belsen trial. She emigrated to Belgium and, in 1946, to Britain. In London, she was a founding member of the English Chamber Orchestra and played the cello in that much-recorded and widely traveled ensemble until the turn of the millennium.

Lasker married the pianist Peter Wallfisch, who also had come from Breslau and taught as a professor at the Royal College of Music in London. She had two children.

Long refusing to set foot in Germany, she paid her first post-emigration visit in 1994. Inherit the Truth was published in 1996. 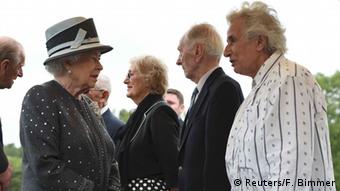 In the years to follow, Lasker-Wallfisch traveled to Germany several times, giving lectures at schools, where she told of her life and that of other victims of National Socialism and the Holocaust.

"It took 50 years for me to talk about it," Lasker-Wallfisch recently said in an interview with Radio Bavaria. "But it's not as though this is the only thing I think about."

Lasker-Wallfisch was among the survivors who were invited to join Queen Elizabeth II in June 2015 in the group of the onetime concentration camp at Bergen-Belsen. The red sweater she had worn there decades earlier is exhibited at London's Imperial War Museum. In 2016, the Jewish Museum Berlin awarded her the Prize for Understanding and Tolerance.

In her speech at the Bundestag marking the liberation of Auschwitz in 2018, Lasker-Wallfisch warned of a current upswing in anti-Semitism in Germany. Her message nevertheless remained one of optimism: "As long as one breathes, one hopes," Lasker-Wallfisch said. "I've spoken to thousands of students. If 10 of them behave properly, I'll be satisfied." 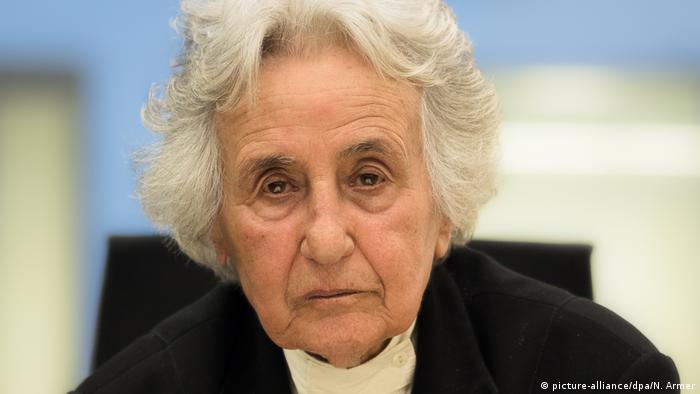 'It's not as though I can't think of anything else': Lasker-Wallfisch about her life as a Holocaust survivor

One recurring theme in her lectures is an exhortation: "Talk to each other before you kill each other, go drink a cup of coffee together. Celebrate your differences!"

The ex-president of the Central Council of Jews in Germany, Charlotte Knobloch, says the party Alternative for Germany endangers democracy. It could soon become the biggest opposition party in the German parliament. (27.01.2018)

Opinion: Should school trips to Auschwitz be mandatory in Germany?

Should students in Germany be required to visit to a concentration camp memorial site? DW's Marcel Fürstenau says that anyone who believes such a trip will prevent anti-Semitism needs to do more reflecting. (13.01.2018)