Police have launched an investigation after the Bremen state chairman of the far-right Alternative for Germany was attacked by three masked men. Frank Magnitz was reportedly knocked unconscious with a piece of wood. 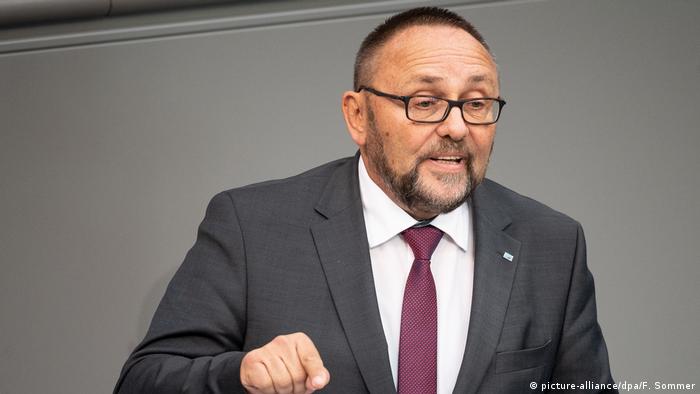 Police are looking for three men who attacked and injured Frank Magnitz, party leader of the right-wing populist Alternative for Germany (AfD) in the city state of Bremen.

A police report said the incident happened on Monday afternoon, near Bremen's Goetheplatz.

Magnitz, a member of Germany's lower house of parliament, was attacked by three masked men, AfD party officials said in a statement.

Magnitz had left a New Year reception hosted by local newspaper the Weser-Kurier shortly before.

He was knocked unconscious with a piece of wood and kicked in the head as he lay on the ground, the party said.

A construction worker was said to have intervened and stopped the attack.

The 66-year-old Magnitz was reported to be in hospital, having sustained "severe" injuries.

Police said that, given Magnitz's position, they were treating the incident as a "politically motivated act." A probe has been launched by police and prosecutors, with investigators appealing for witnesses.

Former Green Party co-leader Cem Özdemir was among several politicians who reacted with shock to the news.

"There is no justification for violence, even against the AfD," wrote Özdemir on Twitter. "Whoever fights hatred with hatred allows hate to win in the end."

Police last week arrested three men in the eastern German town of Döbeln, after an explosion outside an AfD local office in the town. The men were later released, with police saying there was not sufficient evidence to hold them in custody.

Police have reported several attacks against AfD offices in the state of Saxony, where Döbeln is located, in recent weeks.

Fake Coca-Cola and McDonald's advertisements criticizing the far-right Alternative for Germany are springing up around the country. The punchline? It has forced a number of well-known brands to take political stands. (14.12.2018)