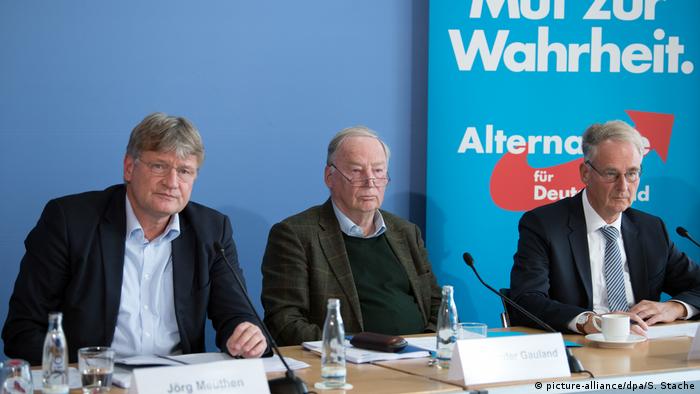 German media outlets aren't allowing themselves to be baited by the populism of the Alternative for Germany (AfD) as much as they used to, according to a new study published on Monday.

The report, published by the Otto Brenner Foundation (OBS), suggests the German media has learned over the past year not to react to "provocations" by the far-right party, but to offer "more steady, less erratic" reporting on controversies like the infamous "bird-poo" speech by AfD leader Alexander Gauland.

Journalists have also found a way to pursue their own stories on the AfD, the study concluded. Rather than endlessly repeating the party's position on migration and refugees, there have been new investigations into party donations, its connections with the neo-Nazi scene, how the AfD organizes its efforts to influence the supporters of other parties, and its highly successful social media strategy.

Some of this new sobriety in the media seems to be down to reporters simply getting used to the AfD, combining new expertise on the party with a deeper willingness to question their own motives. 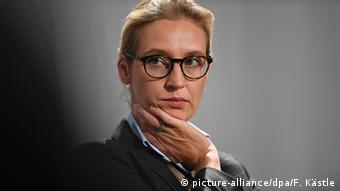 "The surprise moment — oh, there's someone brand new, that's interesting — that has been replaced by more evaluation: what is actually interesting about them?" the study's author, Bernd Gäbler, journalism professor at a Bielefeld university, told DW. "Also I think more editors are addressing the issue, and there are qualified people dealing directly with the AfD."

Gäbler was joined at the press conference Frank Überall, head of the German Journalists' Union (DJV) and also media professor. He suggested that the media had been caught off guard by the AfD, because populism had not played a big role on a national stage until their arrival. This meant that the AfD was able to use the media's instinct for provocation to its advantage.

"That was a learning process for many journalists," he said. "The fact that someone was very definitely exploiting the news criteria for themselves. The fact that a certain group, in this case the AfD, had made it its aim to appear as often as possible in the media they say they hate."

Berlin's AfD spokesman Ronald Gläser dismissed the study, arguing that it addressed only the AfD's relations with "what we see as one-sided mainstream media." He said the AfD was still "under-represented" on the news, especially on political TV talkshows, but he admitted the coverage of his party had become more "sober" since the last election, when the AfD became the biggest opposition party in the Bundestag. "There are fewer negative attributes like 'right-wing extremist' now," he said.

What the two agreed on was that the AfD's social media strategy had been highly successful. "The AfD has managed to do what the Pirate Party failed to do a few years ago: be the party of the internet," Gäbler said at a press conference on Monday. "They did this by exploiting the rules of the internet as they were, rather than trying to democratize the internet."

"It's true that the AfD has got access to people through new media that the older parties, whether left or right, did not have," said the AfD's Gläser. "That explains the biggest success story for half a century. The gatekeepers have lost their power. Hallelujah."

Too many feelings, not enough facts

But the study wasn't all praise. Gäbler, who spent the past year analyzing reporting about the AfD, found enough to complain about, particularly in the local media.

After sifting through three months of AfD coverage in local papers in Hesse and Bavaria, two states that saw crucial elections this past fall, Gäbler commented, "The political reporting is too centralized, big issues hardly appear in the local media, there is a lack of curiosity about their own direct surroundings," he said. He pointed out that too often papers relied on agency copy, even when AfD events were happening in their local area. This allowed the AfD's national party to set the agenda in the regions.

But the report also included criticism of a new tendency towards subjective reporting. "Subjectivism has become an expression of helpless anti-AfDism in journalism," the report read. "Simply to proclaim one's own identity as a hipster, vegan, or young mother and to demand an all-pervading tolerance for other lifestyles, reproduces only 'a society of singularities'."

This, the study claimed, had led to a lack of courage to make overarching claims, or to even debate society in general. "Instead of arguing about terms and facts, there are arguments about feelings and states of mind," it read.

"This isn't wrong per se," said the AfD's Gläser. "Many such reports are more authentic than all the Antifa stories about who knows who and was seen together with who, which the author wants," Gläser added, referring to stories about links between prominent AfD members and the far-right scene.

Germany's far-right AfD wants to set up online portals across the country where schoolchildren can denounce teachers who speak against the party. Critics say the measure is a step in the direction of "totalitarianism." (09.10.2018)