Asylum seekers who suffer hate crimes to get residency in Berlin | Germany| News and in-depth reporting from Berlin and beyond | DW | 16.06.2017

Asylum seekers who suffer hate crimes to get residency in Berlin

Rejected asylum seekers in Berlin will get residency if they can prove they are victims of right-wing hate crime, the city-state's interior minister has said. But the federal government says the offer could be "abused."

Berlin is to become the second German state to offer automatic residency to asylum seekers who become the victims of far-right hate crimes, Berlin Interior Minister Andreas Geisel told his colleagues from the other 15 German states this week in Dresden. The offer, Geisel told the interior minister conference, would also extend to their immediate families.

The point of the legislation was not only to offer people protection and help in Germany, the Social Democratic Party (SPD) politician said, but also to show perpetrators "that their crimes lead to nothing and cause the exact opposite of what they may have had in mind." Hate crime, he added, was defined as any crime motivated by prejudice, whether they were xenophobic, anti-Semitic, sexist, homophobic, or Islamophobic.

The policy, which effective immediately, would see asylum seekers be given automatic residency for the period of any court case, followed by a residency permit - depending on the outcome of the trial. Residency will not be granted if the court found that the asylum seeker had caused themselves to be a victim, or if they had themselves been convicted of a crime. 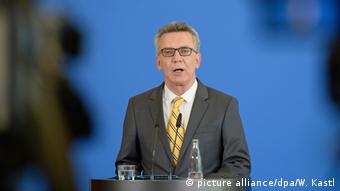 De Maiziere had no interest in the idea

Asylum policy is administrated at state level in Germany, and Berlin's neighbor, Brandenburg, has already implemented the policy, while Thuringia, also in the east of the country, has also announced it is considering the idea.

The policy drew immediate support from Germany's center-left parties. Volker Beck, the Green party's federal spokesman on migration policy, said Berlin's move had "pressured" the national government to make a decision. "A right to residency for victims of far-right violent crime should be created at a national level." It would, Beck added, increase the chances of such crimes being prosecuted.

But the federal government was equally quick to dismiss the idea. In a brief statement, a spokesman for Interior Minister Thomas de Maiziere said that such regulations were "not suitable for fighting right-wing motivated violent crimes." Indeed, such measures, he added, contained "significant potential for abuse."

"Punishing racist- or extremist-motivated crimes remains the remit of the criminal courts, and cannot be resolved with legal asylum measures," he added.

Günter Burkhardt, head of the refugee rights organization, Pro Asyl, said his organization had been pushing for such measures for years. "It would be a clear signal to the far-right that the attacks on refugees achieve the exact opposite of what the perpetrators want," he told DW. 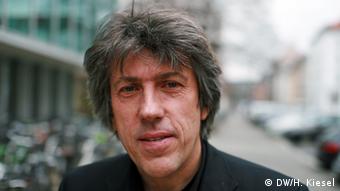 But another, perhaps equally important consequence, Burkhardt added, is that it would mean that asylum seekers would be given a chance to testify in court. "If you want victims to report crimes, then you have to protect them and give them the opportunity to report them," he said. "You need witnesses. They need to be in Germany and they need to feel safe."

Burkhardt also had no time for de Maiziere's concerns about abuse. "It's outlandish that the perpetrators of racist violence should get away without punishment because the interior minister is worried there could be some abuse of the rule," he said. "I don't even know how the abuse could happen."

Stephan Dünnwald of the Bavarian Refugee Council agreed. "The idea that it could be abused is really nonsense," he said. "There are several thousand attacks on immigrants and refugees in Germany every year. This would make sense."

More than anything, Dünnwald said, it was an "important signal" that people who are attacked aren't also then deported. According to Dünnwald, de Maiziere was clearly making a political decision to avoid "any symbols that suggest offering the chance to stay." The minister's position was more "let's deport whoever we can."

A 17-year-old asylum seeker of Kurdish-Iranian origin was attacked last weekend in Croydon in south London. The incident, which left him badly injured, highlights the rise in hate crime in Britain. (05.04.2017)

A human rights watchdog has slammed Germany for failing to protect refugees from racially motivated violence. But Germany is not the only EU country struggling with racial discrimination and violence. (09.06.2016)

Hate crimes soared up by 77 percent in Germany last year compared to 2014, according to a recent report. The data published in the government's latest quality-of-life survey also note a 10 percent rise in burglaries. (25.10.2016)