As tensions with Russia escalate, how significant are NATO′s military drills in Norway? | Europe | News and current affairs from around the continent | DW | 17.03.2022

As tensions with Russia escalate, how significant are NATO's military drills in Norway?

While the war in Ukraine rages on, NATO is conducting large military drills in Norway testing its troops' combat skills in cold terrain and Norway's management of troop reinforcements. 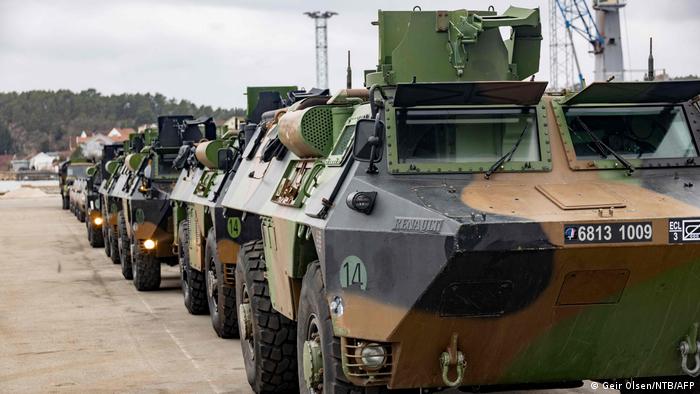 How will Russia react to NATO's drill in Norway?

As Russia's assault on Ukraine edged closer to NATO territories this week, the alliance kicked off a massive military drill in Norway.

Around 30,000 troops, 220 aircraft and 50 vessels from 27 countries are participating in NATO's Cold Response 2022. Militarily non-aligned countries — Finland and Sweden, who maintain close relations with NATO, are also a part of this defense exercise which began on March 14 and concludes on April 1.

Cold Response got underway just after Russian missiles struck a base in western Ukraine, some 25 kilometers (15 miles) from the border of NATO member Poland. Lieutenant Colonel Ivar Moen, spokesperson for the Norwegian Joint Headquarters, stressed that this military exercise was planned even before Russia's invasion of Ukraine.

"Cold Response is normally held in March every year, where NATO troops practice their combat skills in the cold Norwegian weather. Drills are held on land, in the sea and in the sky. This year's exercise was planned months in advance and is in no way linked to Russia's invasion of Ukraine," Moen told DW.

"The main purpose of Cold Response is to test how Norway receives and manages allied reinforcements. This defensive exercise for Norway is in line with Article 5 of NATO's Charter, which requires allies to rescue one another if attacked," he added.

As a part of this drill, Norway was also required to invite all 57 member states of the Organization for Security and Co-operation in Europe (OSCE), including Russia, to observe the exercise.

This is an obligation under the Vienna Document — a series of security agreements between European nations, which also seek to ensure transparency around military drills. 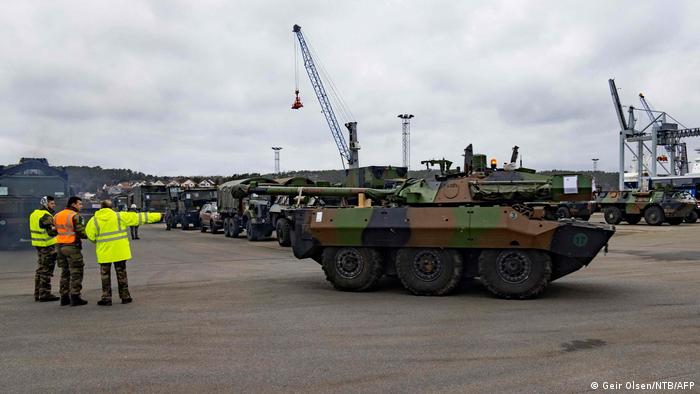 While the war rages in Ukraine, NATO and its partners are sharpening their combat skills in Norway as a part of NATO's Cold Response drill.

While the Kremlin declined the invitation, the Russian Embassy in Norway told French news agency AFP last week, that "any buildup of NATO military capabilities near Russia's borders does not not help to strengthen security in the region."

"This is not a buildup of troops. This is a defensive exercise and we will not be training near the border with Russia. It is a simple yearly drill to ensure Norway and its NATO allies are safe amid current and any future tensions," Moen said.

Fabrice Pothier, strategy officer and CEO of policy group Rasmussen Global, explained that Russia's views on NATO drills are all a part of Moscow's playbook.

"Russia will pretend to feel threatened with these drills and call it a buildup of troops along its border with Norway. But NATO is allowed to hold drills to strengthen its troops and there is nothing threatening about that," he told DW.

Since the 1950s, Norway has hosted many military exercises for NATO countries, which aim to bolster their military capabilities amid the cold and rugged Norwegian skies, fjords, seas and mountains.

The country hosted the first Cold Response drill in 2006 and plans the exercises months in advance.

According to the Permanent Delegation of Norway to the OSCE, this year's Cold Response is taking place in south-eastern, central and northern Norway in three phases.

While the first phase of the drill has begun with maritime drills in the Atlantic, the second phase will focus on air operations involving NATO airplanes, testing their ability to land on icy terrains efficiently. The last phase will include amphibious landing and land battle training. The entire drill is aimed at ensuring that Norway has the capability to handle NATO deployments. 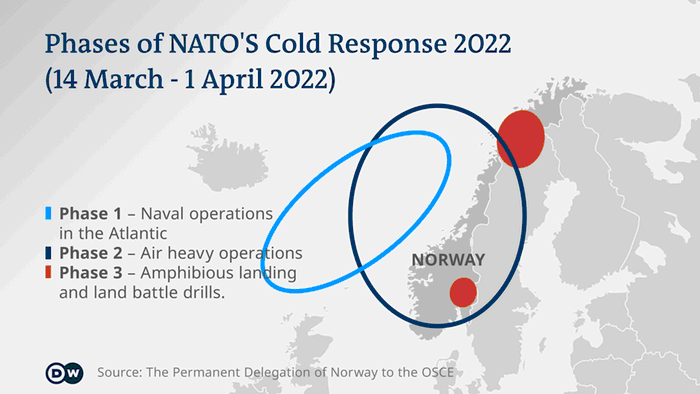 But amid rising tensions with Russia and the Kremlin threatening to use nuclear weapons in Ukraine, Moen stressed that the exercises of Cold Response 2022 will not be adapted to include drills to tackle nuclear threats.

"Acting as a sort of Guardian of the North, Norway has planned this drill before the war in Ukraine. That plan will continue without any changes," Moen said.

Stefan Scheller, an associate fellow at the German Council on Foreign Relations, thinks the focus of Cold Response 2022 which involves practicing amphibian operations in cold weather conditions, can help to strengthen NATO.

"It is very positive that 27 nations have signed up for the exercise, since the more participants you have, the better the training within the alliance will be," Scheller told DW.

"Moreover, it is great that the drill was not canceled this year. Otherwise the alliance would have sent a wrong signal and a sign of weakness in these troubled times," he added.

That's echoed by Ivana Stradner, an advisor to the Foundation for Defense of Democracies.

While NATO continues to hold military drills to fortify its territories and capabilities, Rasmussen Global's Pothier thinks that the current security situation in Europe should motivate NATO to focus on different defense tactics.

"Military exercises do help strengthen troops, but I expect NATO to be more active in other fronts as well like pushing back on military threats from Russia and focusing on deploying air defense systems to protect Ukraine," he said.

"The edge of NATO's border is now under attack and the only way to defend it is to augment NATO's air defense forces," he added. Stradner highlighted that while Putin perceives NATO and its drills as a threat, it shouldn't mitigate NATO's vigilance.

"Russia constantly claims to be threatened by NATO but this is a purely defensive alliance that does not seek to [encroach upon] Russian territory. We can expect Putin to find NATO's weak link in order to show that the alliance is a paper tiger. So NATO has to be ready to respond," she said.

NATO troops arrive in Romania as Ukraine crisis heats up