What would Russian WMDs mean for NATO's 'red lines'?

No one knows how close the Kremlin may be to using chemical or nuclear weapons in its assault on Ukraine, attacks that could blur borders. Teri Schultz takes a look at whether NATO's perception of safety is changing. 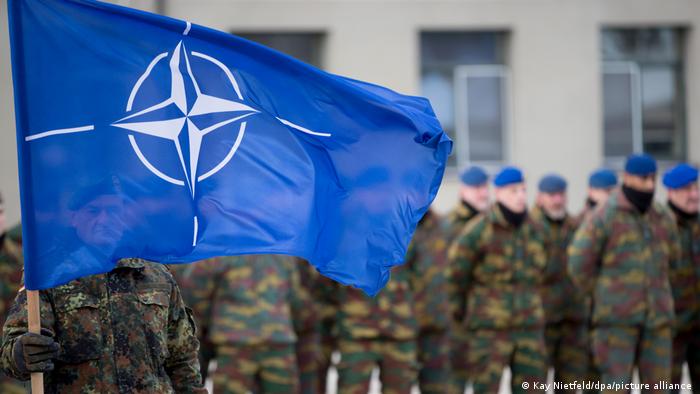 So far, NATO has ruled out getting involved in the fighting

Russian Foreign Minister Sergey Lavrov is demanding an international "investigation' into his own government's allegations that Ukraine has biological and chemical weapons laboratories. It's not unexpected.

"We have seen them accusing Ukraine and also NATO allies [of] producing and developing chemical weapons and that's an absolute lie," he said. "And therefore it also makes us a bit concerned about the possibility that they are actually planning to do that." On Sunday, Stoltenberg told the German newspaper Welt am Sonntag that a chemical attack "would be a war crime."

Would that be enough to convince NATO to step in? Polish President Andrzej Duda has openly issued that challenge. "If [Russian President Vladimir Putin] uses any weapons of mass destruction (WMD) then this will be a game changer," he told the BBC on March 13.

"For sure, [NATO's] North Atlantic alliance and its leaders, led by the United States, will have to sit at the table and they will really have to think seriously what to do because then it starts to be dangerous," Duda said.

When DW asked Stoltenberg on Tuesday whether such an action would change NATO's position, the NATO chief stuck to the script. "The president of the United States and other allies also made it very clear that if they use chemical weapons, there will be a high price to pay,” he said.

"But I will not speculate about any military response from the NATO side except for saying very clearly that NATO's main responsibility is to make sure that we defend and protect all allies, he added.

In addition to chemical weapons, concern is growing that Russia might use nuclear weapons or unleash a radiation accident at one of Ukraine's four nuclear power plants, among them Europe's largest, the Zaporizhzhia site, which was the scene of a battle early in the invasion.

On Monday, the Ukrainian national nuclear energy Energoatom reported that Russian forces had taken just such a risk, blowing up ammunition at the plant.

The high level of uncertainty and volatility led a group of international experts and former policymakers, including former Russian Foreign Minister Igor Ivanov, to issue a joint statement, warning of the potential for "catastrophic consequences.”

The co-conveners of the Euro-Atlantic Security Leadership Group  says the first and most essential step toward reducing the risks of a consequential accident, mistake or miscalculation is a ceasefire to end the unacceptable and unjustifiable loss of human lives.

"The ongoing conflict in Ukraine elevates such risks dramatically," they write. "The firefight at the Zaporizhzhia nuclear power plant in Ukraine was the latest reminder of how nuclear catastrophe can quickly rise to the surface in the 'fog of war.'" They call for an immediate ceasefire and continued "dialogue, diplomacy and negotiations."

Battle for Kyiv edges closer to center of the capital

With every world leader who speaks with Vladimir Putin having concluded that the Russian president has no plans to stop the war, the question still comes back to how NATO would respond to the escalating threat of the use of a weapon that could wield mass destruction both inside and outside Ukraine.

Ian Bond, director of foreign policy at the Center for European Reform, told DW that, though such a scenario is implausible, it's not impossible. Given Stoltenberg's rhetoric, Bond said, it's likely "that the Russians are doing things that suggest they are preparing to launch that kind of attack somewhere.”

But it's the "somewhere" that makes all the difference under the alliance's current posture. "NATO, rightly or wrongly, has drawn this bright red line that says we're not going to defend Ukrainian soil, but we will defend NATO soil," he said.

"It's almost inviting Putin to go up to the 'red line.' I figure Putin reckons: OK, so they say they're not going to do that so we can go up to that line. We might even be able to have a little way across that line and they still might not be that keen to get involved in a rumble with me.'" 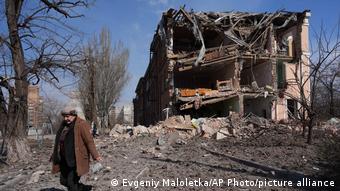 So far, Moscow has only used conventional weapons

While Bond emphasizes that Putin's potential use of chemical weapons — especially on NATO territory — remains for now far-fetched, he believes that it's in the alliance's interest not to elaborate on how it would respond. NATO doesn't have chemical weapons, he notes, but it "might want to leave some ambiguity as to whether, if it's attacked with weapons of mass destruction, it might respond with its own weapons of mass destruction, which would not be chemical but would be nuclear.”

Veronika Vichova, deputy director of the Prague-based European Values Center for Security Policy, told DW that she disagrees with that strategy — not its execution but its communication. She believes NATO should openly acknowledge that it's possible there may be a WMD attack not just on Ukraine, but on an ally.

Vichova said the West was deceiving itself if it believes that leaving something to the imagination may prevent escalation of the conflict. "Putin already shows that he doesn't need an actual provocation,” she said. "He will just do whatever he wants.”

She said her larger concern was the morale of the Ukrainians who are dying every day defending their country. "And the message from NATO, which basically only relies on them to keep up the fight," Vichova said, "is literally just sending the message that 'hey, we're not actually going to do anything much to help you.'"