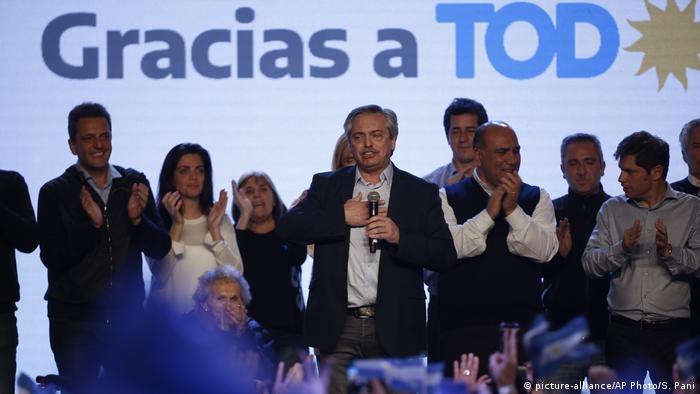 He may not feel it, but Mauricio Macri,the former president of Argentina, might count himself a lucky man. The first non-Peronist since 1983 to last his four-year term, he can now sit and watch his successor, Alberto Fernandez, grapple with the same, perhaps irreconcilable, forces.

Fernandez faces demands from the left of the coalition that swept him to power on December 10 to increase social spending, while investors want him to prioritize recalibration of Argentina's chronic debt situation. If the choice of Fernandez's deputy, former president Cristina Fernandez de Kirchner, is anything to go by, fiscal fastidiousness is perhaps not on the cards.

Fernandez's prime minister, Frente de Todos's first legislative victory since taking office earlier this month was a package declaring a public emergency until December 31, 2020. The package includes tax rises on the wealthier and tax relief for the poorest. It also imposes a 30% tax on foreign currency transactions abroad, while keeping a currency cap of $200 per person per month imposed by the Macri administration.

The administration said 70% of the new revenues would be used for social programs, including subsidizing free food vouchers for two million of the poorest Argentinians, and the rest for infrastructure and housing.

The number of people in poverty in the country is nearing 40%, according to the World Bank. The economy — already reeling from rising inflation, which has topped 50%, and ballooning external debt, which is at about 90% of GDP — is expected to shrink by 3.1% in 2019.

The legislative package also hands the new president special powers to renegotiate debt terms. Fernandez wants to restructure the country's debt with private bondholders and the IMF, which agreed to a $57-billion (€50-billion) standby loan agreement with Macri last year

Argentina's total debt stands at $332 billion, including the IMF loan. Outstanding debt with private bondholders is about $148 billion and talks with creditors have started to renegotiate $100 billion of this, while the new administration has postponed payments on some of its short-term debt. The government still has to repay 66 billion pesos ($1.1 billion, €990 million) of maturing debt before the end of this year.

Under Macri, Argentina announced a reprofiling of its debt payments and Fernandez wants to follow suite. It's not yet known what the restructuring would look like, but the government is expected to focus on local debt, which is less problematic for international legal reasons. Some $9.1 billion in payments on the local notes, known as Letes, would be affected. "The Letes reprofiling should be good for foreign currency bonds under foreign law as this reduces the government's financing needs in dollars," said Daniel Chodos, who heads Latin America sovereign credit strategy at Credit Suisse.

About half of the total debt is in foreign currency (forex) and would be difficult to service given that the central bank holds just $43.5 billion in gross forex reserves. Bank deposit flight and investor outflows have already reduced currency reserves from about $66 billion before the primary election in October.

Argentina's sovereign debt has been downgraded deeper into junk territory by Moody's, and to selective default by Standard & Poor's. Fitch downgraded Argentina to "Restricted Default," a credit rating applied to borrowers that have defaulted on one or more of their commitments while continuing to meet others.

"Delaying some of the government's sky-high $70 billion of repayments due before the end of 2020 would lift a substantial burden," Nikhil Sanghani, a London-based economist at Capital Economics, told DW.

The new governing team has reportedly managed to appeal to some bondholders, including Pacific Investment Management, to roll over maturing debt. Finance Secretary Diego Bastourre and his deputy, Ramiro Tosi, met with Pimco officials and local bondholders on December 18 and persuaded them to accept new notes in exchange for 24.5 billion pesos ($410 million) of bonds maturing in the same week.

"Argentina's fiscal underpinnings are temporarily in much better shape than they were just two months ago," Walter Stoeppelwerth, chief investment officer at Portfolio Personal Inversores in Buenos Aires, wrote in a note last week. "This is undeniably good news."

What's to be done?

"Argentina has fallen back into crisis for the simple reason that not enough has changed since the last debacle," Mohamed A El-Erian, chief economic adviser at Allianz, wrote in The Guardian newspaper.

"Like Brazil under then-President Luis Inácio Lula da Silva in 2002, Argentina needs to embark on a third path, by developing a homegrown adjustment and reform program that places greater emphasis on protecting the most vulnerable segments of society," A El-Erian said.

With government spending already running at about 40% of GDP, fiscal consolidation would require cuts to social spending as well as pension reform.

"The government has merely kicked the can down the road and maturity extensions alone will not be enough to resolve the debt problem," Sanghani said. "Fernandez's plan to resolve Argentina's debt crisis by growing the economy is not a realistic option," he said, adding that a large debt write-down within a few years is inevitable.

"Maturity extensions would not address fundamental issues with Argentina's debt dynamics," Sanghani said. "We don't think that the government's new economic plan will spur sustained economic growth. Without a credible plan to manage the economy and the public debt, the government faces difficult and drawn-out negotiations with private bondholders and the IMF."

This is, of course, nothing new. Since 1950 Argentina has spent 33% of the time in recession, according to the World Bank. The country has had the highest inflation levels in recent history, a median of 220% annually since 1980, according to estimates from the Institute of International Finance, a Washington-based association of financial institutions.

President Mauricio Macri agreed to cut government spending last year in exchange for a loan from the International Monetary Fund. His popularity has plummeted ahead of a presidential election in October. (01.05.2019)

Blackouts that affect an entire country are incredibly rare. So how did it happen in Argentina? DW examines what occurred in the South American country. (17.06.2019)