President Mauricio Macri agreed to cut government spending last year in exchange for a loan from the International Monetary Fund. His popularity has plummeted ahead of a presidential election in October. 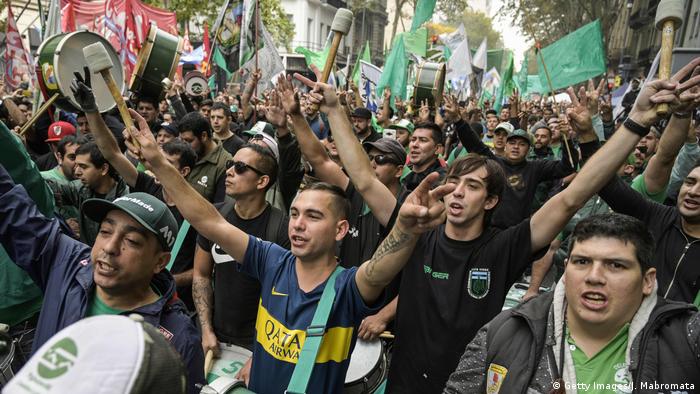 Tens of thousands of Argentines protested against President Mauricio Macri's austerity drive on Tuesday after labor unions began a 24-hour partial strike that brought airports, banks and schools across the country to a standstill.

The unions called the strike amid rising opposition to Macri, who last year passed a sweeping program of government spending cuts to combat rapid inflation and a severe currency crisis.

"I came here to protest because I can't manage on my salary. The government has to go. It hasn't managed to sort out the economic situation," said Juan Arrique, a 32-year-old trucker demonstrating in Buenos Aires, speaking with the Agence France-Presse.

The cuts, which the government agreed to in exchange for a $56 billion (€50 billion) loan from the International Monetary Fund, have hit many poorer Argentines. Nearly one in three people live below the poverty line, and unemployment is rising.

Macri's popularity has fallen steeply since the cuts began, raising doubts about whether he can win reelection in October.