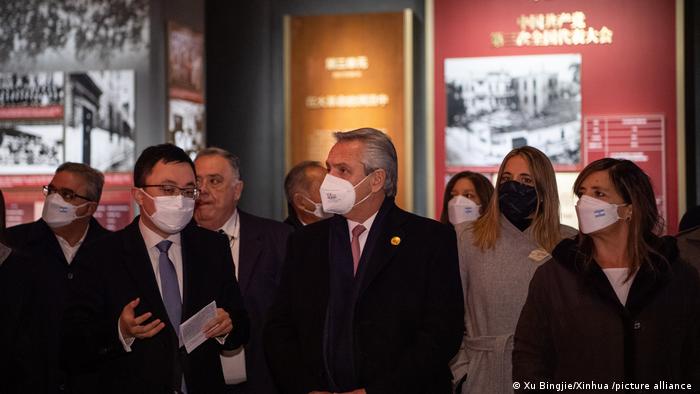 During his visit, Argentinian president Alberto Fernandez (center) visited sights such as the Museum of the Communist party in China

China and Argentina pledged deeper economic cooperation and integration in the infrastructure-focused Belt and Road Initiative, after a meeting on Sunday between presidents Xi Jinping and Alberto Fernandez.

The two leaders agreed to a five-year plan for agricultural cooperation, focusing on key areas to grow and diversify trade and investment within the sector.

The deal, concluded at a 40-minute meeting on the sidelines of the Beijing 2022 Winter Olympics, is of great importance to Argentina. It comes at a time when the South American country greatly needs to improve its economic performance.

On Sunday, the two presidents signed a memorandum of understanding related to China's signature Belt and Road initiative, which is a platform for Chinese investment in railways, ports and highways worldwide.

"This strategic decision will allow the national government to sign different agreements that guarantee financing for investments and works for more than $23.7 billion," Argentina's government said.

Meanwhile, Xi stressed that China was willing to share development opportunities with Argentina and help it expand exports and upgrade its industries. Argentina and China also commemorated the 50th anniversary of their reestablishment of diplomatic relations, declaring 2022 the "year of Argentinian-Chinese friendship and cooperation."

The ongoing visit marks Fernandez's first trip to China, as the COVID-19 pandemic had delayed what was a highly anticipated trip for Buenos Aires.

Fernandez arrived in Beijing as part of a larger tour that also included a trip to Russia, as Moscow and the West face off over Ukraine.

The Argentinian president had a warm encounter with Vladimir Putin, saying that his country should be "a door for Russia to enter Latin America in a more decisive way." He also mentioned that his country sought to lessen its dependence on the IMF and the US.