Are Russia′s anti-terror laws designed to fight democracy? | Europe | News and current affairs from around the continent | DW | 23.06.2016

While the world has its eyes on a Brexit, the Russian Duma is voting on a set of anti-terror laws that will drastically limit civic freedoms. Above all, social media activities will be harshly penalized in the future. 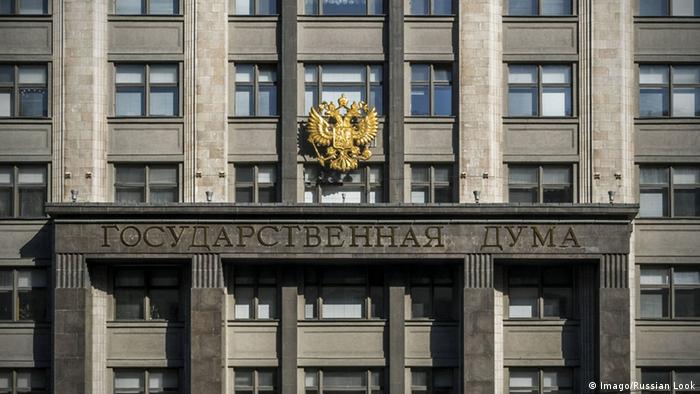 The Russian parliament will end its legislative season with a bang. While the entire world is talking about the effects of Britain's EU referendum (Brexit), members of the Russian Duma could pass a controversial set of laws on Friday - their last day of business before the summer break.

A second and possibly a third and final reading of the bill is planned for the session. Officially, the laws are designed to fight terrorism, however, warnings about the fact that they will massively limit civil rights and freedoms have been growing. Some see the Kremlin's battle with opposition parties as the main motivation for the package. "Effectively, it is about destroying all those that are not in agreement with the government," independent parliamentarian and Kremlin critic Dmitry Gudkow posted on Facebook.

When the current parliament was voted into office in 2011, accusations of election fraud sparked mass protests in Moscow. Doubt was cast on representatives' legitimacy. The Duma has subsequently passed a number of laws that would make similar protests impossible. In September, Russia will elect a new president.

The so-called "Anti-Terror Package" was initiated by Irina Yarovaya, among others, and it carries her name. The 49-year-old was formerly a liberal politician, but she has gained a reputation as a hardliner since joining the Kremlin party "United Russia." Yarovaya was also a co-initiator of the 2012 non-governmental organization (NGO) law that required NGOs to register as "foreign agents." That law garnered much international criticism, and was seen as a defamation of the work that NGOs do.

Yarovaya says that the new laws are essential for protecting Russia from "terrorism and particularly dangerous crimes." The package seeks to tighten existing laws and define new punishable offenses. Thus, in the future one may be given a life sentence for terrorism. Financing terrorism, which currently carries a penalty of 10 years, will soon carry one of 15. And anyone who has knowledge pertaining to terrorism but fails to alert authorities, makes him or herself culpable. That last offense is new, as is that of "aiding extremist activity."

The age of criminal responsibility is also to be lowered to 14 years of age. This has nothing to do with terrorism. It would simply allow youths "participating in mass unrest" to be harshly punished. This particular passage in the bill reads like a prescription against the kind of uprisings that took place in Ukraine in the winter of 2013/2014 - and in which many young people were instrumental. 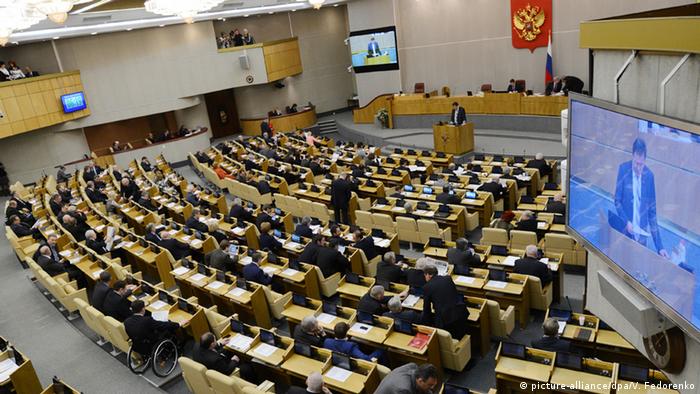 The Russian parliaments is voting on stricter laws and tougher penalties

More control of the internet

To date, the internet has been a zone of relative freedom against the backdrop of Russian state-run media. Yet, should the new laws pass, freedom of opinion and freedom of speech will likely suffer. Whoever engages in "extremist activity" online will go straight to jail, fines will no longer be handed down. Whosoever even forwards an "extremist" photo on a social media network, risks losing their freedom. In the past few months there has been an increase in the number of people convicted for statements made on social media networks.

Internet providers will also be required to save all communication for a time period of six months and provide authorities with unlimited access to it. Several trade association members have protested the measure, arguing that it would threaten citizens' private lives and security. Communications providers also requested that this proposal be struck from the bill.

The "Yarovaya Law" was roundly criticized even after its first reading in May. The package, it was said, would not achieve its stated goal of fighting terrorism. It was the presidential Council for Civil Society and Human Rights that came to this conclusion. In an explanation, the Council stated that the intention of "fundamentally weakening civil rights" could be seen in the bill, suggesting that it be revised.

Renowned Moscow-based human rights activist Lev Ponomaryov recently published a dramatic appeal on his blog. The "Yarovaya Law," he said, gave all those critical of Moscow's current government but one choice: Exile or jail. And since fleeing abroad could also be hindered by the new laws, Ponomaryov wrote that they established a "de facto iron curtain."

A great amount of criticism was generated by the proposal of revoking Russian citizenship. The new laws envision expatriation of convicted terrorists, but also persons that work for foreign armed forces, intelligence services or courts. However, there was a surprising climbdown on that point Thursday. All passages referring to revoking citizenship were removed from the draft according to the state news agency TASS. Apparently representatives realized that they may have gone too far with the move.

European monitoring group OSCE has called on Ukraine and Russia-backed separatists to do more to investigate violations of the ceasefire. The shaky ceasefire was brokered in Minsk last year. (22.06.2016)

Sanctions against Russia should be directed toward individuals, says Ukrainian fighter pilot and parliamentarian Nadiya Savchenko in a DW Interview during a visit to the Council of Europe in Strasbourg. (22.06.2016)

EU to extend Russia economic sanctions for another six months

European Union envoys have agreed to prolong their bloc's economic sanctions against Russia for six months. The bans are aimed at curbing Russia's influence in eastern Europe, particularly in Ukraine. (21.06.2016)