Arab League summit wraps up with plan for pan-Arab force

Arab leaders have agreed to try to form a joint military force to tackle regional crises. Saudi Arabia is already leading a coalition of Arab countries that have been conducting airstrikes against rebels in Yemen. 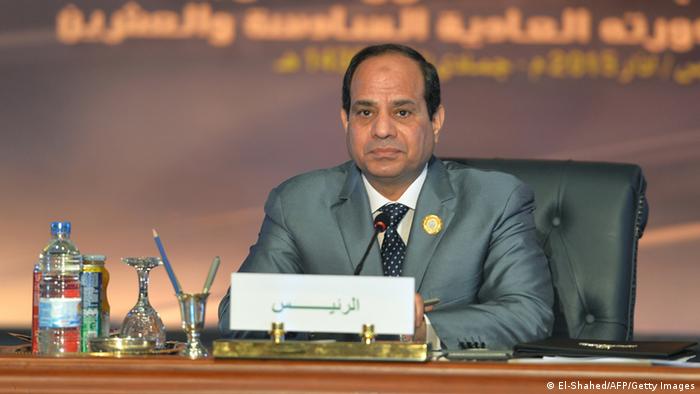 Egyptian President Abdel-Fattah el-Sissi (pictured above), who hosted the two-day Arab Summit at the Red Sea resort of Sharm el-Sheikh, told the final session of the gathering that the leaders had agreed in principle to form the pan-Arab force. He said a high-level committee would be formed to work out the details of implementing the force.

Other Egyptian officials said it was to include up to 40,000 elite troops backed up by fighter jets and warships. However, it wasn't immediately clear how many of the Arab League's 22 member states were prepared to contribute to the proposed force.

Much of the discussion over the past two days focused on Yemen, which the elected president, Abed Rabbo Mansour Hadi, fled late last week, before traveling to Sharm el-Sheikh.

With Shiite Muslim Houthi forces advancing on President Hadi's power base of Aden in the south of the country, Sunni Muslim Saudi Arabia, along with several other Arab nations, launched a bombing campaign against the rebels four days ago. So far though, there was little evidence that the air campaign had stopped the Houthi advance.

Rebels 'pushed out' of airbases

However, Saudi military spokesman Brigadier-General Ahmed bin Hasan Asiri said on Sunday that the airstrikes had succeeded in pushing the rebels out of contested air bases and destroyed any jet fighters that remained in Yemen. He also said the strikes continued to target Scud missiles, leaving most of their launching sites "devastated."

The AFP news agency also reported that the airstrikes had targeted Yemen's main international airport in the capital, Sanaa, which is controlled by the rebels, whose allies include forces loyal to former President Ali Abdullah Saleh.

In Sharm el-Sheikh, Yemen also figured prominently in the final communiqué issued by the Arab leaders, which pledged that the Saudi-led airstrikes would continue until the Houthis and their allies "withdraw and surrender their weapons."

"Yemen was on the brink of the abyss, requiring effective Arab and international moves after all means of reaching a peaceful resolution have been exhausted to end the Houthi coup and restore legitimacy," said the statement, which was read out by Arab League Secretary-General Nabil Elaraby.

The Houthis are widely understood to be backed by Shiite power Iran, and Yemen's president Hadi directly accused Tehran in a statement on the first day of the Arab summit. Both the Houthis and Iran have denied this, but Tehran has reacted with anger to the Saudi-led airstrikes.

Meanwhile, the Reuters news agency reported on Sunday that a Chinese military ship had docked in the port of Aden to evacuate Chinese diplomats and expatriate workers, a day after Saudi Arabia did the same and the United Nations pulled its staff out of Yemen.

Leaders of the Arab League are meeting to discuss measures to deal with growing radicalism in the region and unrest in Yemen. Yemen's President Mansour Hadi has accused Iran of supporting Houthi rebels. (28.03.2015)

Yemen's president, Abed Mansour Hadi, has arrived in Saudi Arabia after fleeing the threat of a rebel takeover. Riyadh led airstrikes against Houthi militia after they made major advances on the city of Aden. (26.03.2015)

The coalition fighting in Yemen said Houthi rebels hit several energy facilities in Saudi Arabia. This comes days after the rebels rejected a GCC invitation for talks on the conflict.