Egypt's president has called for the creation of a unified Arab force to tackle regional crises. He was speaking at the start of two days of Arab League talks expected to focus largely on conflict-torn Yemen. 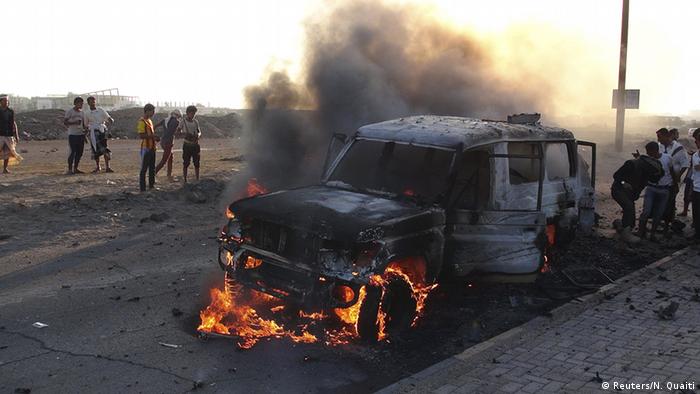 Egyptian President Abdel-Fattah el-Sissi told other Arab League heads of state on Saturday that he fully supported a draft resolution to be discussed over the next two days that would provide the framework for the creation of a pan-Arab military force that could intervene in regional crises.

El-Sissi, who is hosting the summit in the Egyptian Red Sea resort of Sharm el-Sheikh, told his fellow Arab leaders that the region was facing "unprecedented" threats to their stability and identity.

The Egyptian president was referring not only to the Shiite Houthi rebels who are fighting to topple Yemen's president, Abdel Rabbo Mansour Hadi, but also the threat posed by "Islamic State" fighters, who have seized large swathes of Syria and northern Iraq over the past year.

The fighting in Yemen was also front-and-center as Kuwait's Emir Sabah al-Ahmed delivered his opening remarks to the summit in the Red Sea resort.

"Rapid developments underway in Yemen pose a threat to our security," the emir said, adding that this and other crises required Arab countries to plot a "new course of action."

"The situation is getting worse and complicated," he said.

The Arab League summit kicked off as Saudi Arabia and its Sunni allies continued to launch airstrikes on the Houthi rebels in Yemen, who despite more than two days of bombing have continued to advance on the southern port of Aden, from which President Hadi, who is also in Sharm el-Sheikh, fled earlier in the week.

Hadi called for the Saudi-led bombing to continue, adding that the Arab League should continue to support his country.

"Your responsibility today is preserving security and stability, protecting state institutions ... and carrying out the orders of your legitimate leadership," he said at the Arab League meeting. "I call for this operation to continue until this gang surrenders and withdraws from all locations it has occupied in every province."

In his opening remarks at the Arab Summit, Saudi King Salman vowed that the military campaign would continue until stability and security had been restored. He also accused an unnamed foreign power of seeking to destabilize the region.

"The Houthi militias have elicited foreign powers' support to threaten the region's security," the king said, without naming Iran, which is widely understood to be backing the Houthis. Both Tehran and the rebels have denied this.

Meanwhile, there were signs that things were getting worse on the ground, with the Reuters news agency citing an unnamed United Nations source who said that the organization was evacuating its staff members from Yemen's capital, Sanaa, which is controlled by the rebels.

Earlier, Saudi state television announced that the country's military had begun evacuating diplomats from Aden as the Houthis continued to advance.

"The Saudi Royal Navy implemented an operation called 'Hurricane' to evacuate dozens of diplomats, including Saudis, from Aden," read a news ticker on the television news station.

President Hadi has landed in Egypt for an Arab League summit, where Yemen is to take center stage in crisis talks. Riyadh has launched airstikes against the Yemeni rebels, fearing the spread of Iranian influence. (27.03.2015)

Warplanes of Saudi Arabia and Arab allies have struck Yemen on a second night in a campaign against Yemeni Shiite Houthi rebels. Iran has denounced the bombing. The US says it has shared intelligence on Houthi targets. (27.03.2015)