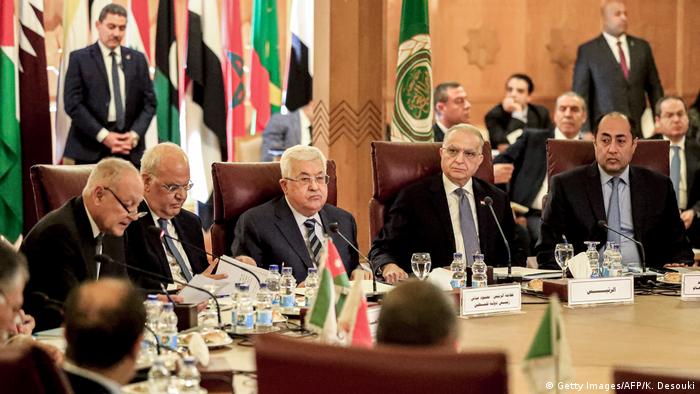 Arab foreign ministers meeting in Cairo, Egypt to discuss US President Donald Trump's plan to end the Israeli-Palestinian conflict, which was formally announced last week, have rejected the proposal.

In a communique, the Arab League said it would not cooperate with the US to execute the plan because it "does not meet the minimum rights and aspirations of Palestinian people."

The pan-Arab bloc also said Israel should not implement the initiative by force.

The meeting at the Arab League headquarters came at the request of the Palestinians.

"The plan leads to a status that amounts to a one-state situation that comprises two classes of citizens, that is apartheid, in which the Palestinians will be second-class citizens, deprived of the basic rights of citizenship," Arab League Secretary General Ahmed Aboul Gheit said in Cairo.

Trump's long-awaited proposal for Israeli-Palestinian peace would allow Israel to annex all its West Bank settlements, something that the Palestinians and most of the international community view as illegal.

It also allows for the annexation of the Jordan Valley, which accounts for roughly a quarter of the West Bank.

Palestinians would be granted statehood in Gaza, scattered chunks of the West Bank and some neighborhoods on the outskirts of Jerusalem. The US has proposed to link these Palestinian sections through new network of roads, bridges and tunnels, while letting Israel control the state's borders and airspace, as well as maintain overall security authority.

President Mahmoud Abbas, who attended the gathering in Cairo, said he remained committed to ending the Israeli occupation and establishing a Palestinian state with its capital in east Jerusalem.

"I will not have it recorded in my history that I have sold Jerusalem," he said, adding that he would cut security ties with the US and Israel.

Abbas said earlier that his response to Trump's proposal was "a thousand no's."

Diplomatic adviser to Abbas, Majdi al-Khaldi, had said the Cairo meeting's goal would be to issue a "clear declaration'' rejecting the deal.

Saudi Arabia and Egypt — close allies of the US — have maintained a neutral position on the plan, saying they appreciated Trump's efforts and calling for renewed negotiations.

But Jordan, who has a peace treaty with Israel, warned against any Israeli "annexation of Palestinian lands'' and reaffirmed its commitment to the creation of a Palestinian state that included all the West Bank and Israeli-annexed east Jerusalem.