Presenting a united front at the Arab League summit, leaders of Arab states have "absolutely" rejected US recognition of occupied Golan Heights as Israeli territory. A Qatari emir unexpectedly left the Tunisia meeting. 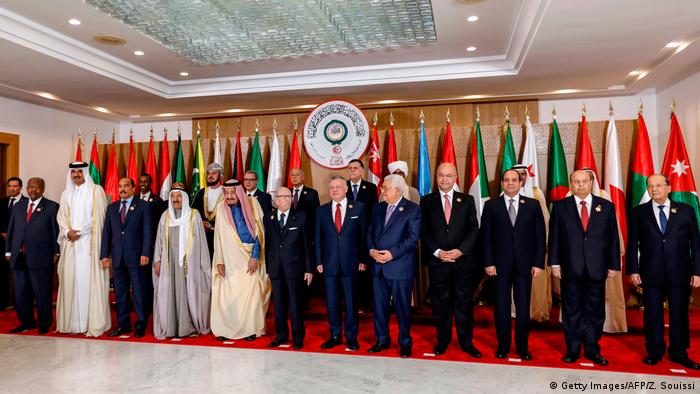 The Arab League closed ranks on Sunday against Donald Trump's move to recognize Israeli sovereignty over the Golan Heights, despite growing tensions between the 22 member states.

The group "affirmed that the Golan is occupied Syrian territory according to international law, the decisions of the United Nations and the Security Council" in a final declaration issued at the end of the one-day summit in Tunisia.

Ahmed Aboul Gheit, the Arab League's secretary general, said the organization would present a draft resolution to the UN Security Council condemning the US move and ask the International Court of Justice for a legal opinion on the matter.

'Occupation is a crime'

Israel wrestled the control of the border region from Syria during the Arab-Israeli war in 1967 and annexed it 1981, although nearly all countries view the Golan Heights as occupied territory.

"Occupation is a crime and legalizing is a sin," Gheit said.

The sentiment was echoed by UN Secretary General Antonio Guterres, who told Arab leaders at the summit that any resolution to the war in Syria must guarantee the nation's integrity, including the occupied Golan Heights.

Syria was not represented at the meeting. Other Arab League countries suspended Damascus' membership in 2011 due to a violent crackdown on the opponents of President Bashar al-Assad, which eventually spiraled into a civil war.

Damascus' return to the organization remains unlikely in the near future. The regime in Syria is angry with Saudi Arabia and Qatar for providing support to rebels who fought against Assad.

While Arab leaders displayed unity over the Golan Heights, the nations still face a host of other divisive issues such as the war in Yemen, Iran, and the prolonged crisis in Libya, as well as unrest in Algeria and Sudan.

Saudi Arabia and the United Arab Emirates also remain at odds with Qatar, accusing it of sponsoring terrorism and moving closer to Iran.

The Sunday summit was the first event to bring the rulers of Saudi Arabia and Qatar to the same table since 2017, when Riyadh imposed sanctions on Doha.

However, Qatar Emir Sheikh Tamim bin Hamad Al Thani unexpectedly left the summit hall shortly after the opening session. Qatar media confirmed the ruler had left and the rest of the delegation was still at the event, but did not provide reasons for the development.

Syria enters 2019 with all signs pointing to it being reaccepted into the Arab fold. The diplomatic shift is a recognition that the war has been won and Arab states need to exert influence in a post-conflict Syria. (01.01.2019)