Thousands of people have gathered in the German city of Dresden for the weekly rally of "anti-Islamization" group PEGIDA. It comes as German leaders warn against using the Paris attacks to incite anti-refugee sentiment. 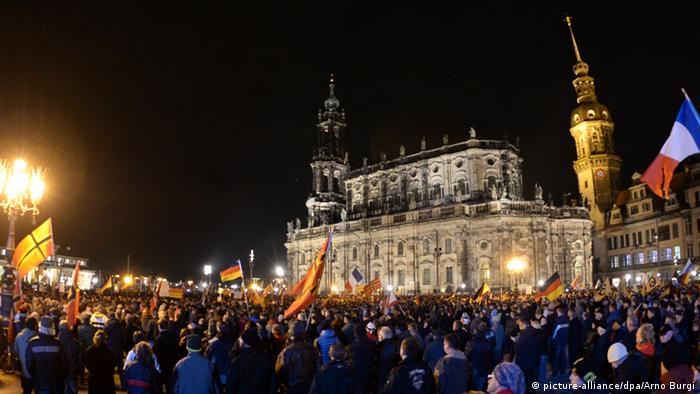 Monday's rally by the group, whose name stands for "Patriotic Europeans against the Islamization of the Occident" in German, took place in front of one of Dresden's major landmarks, the Semperoper.

Durchgezählt, a student research group that estimates attendance at large events, put the number of participants at between 9,000 and 12,000, comparable with PEGIDA rallies in the last three weeks. Some observers had reckoned with a larger rally following Friday's terror attacks in Paris.

In January, more than 20,000 people attended a PEGIDA demonstration following the deadly attack by Islamists on staff at the French satirical magazine "Charlie Hebdo" in Paris.

DW's Michaela Küfner was at the scene reporting for DW News, and faced calls of "lying press" from the PEGIDA supporters.

'Refugees are not terrorists'

The rally comes amid heated debate in Germany about whether the influx of largely Muslim refugees entering Europe could pose a security threat, with Islamist terrorists possibly pretending to be asylum seekers.

German Justice Minister Heiko Maas on Monday urgently warned against equating refugees with terrorists. He told ARD public television that there was "not a single proven connection between terrorism and the refugees except perhaps one: that the refugees are fleeing from the same people in Syria that are responsible for the attacks in Paris."

Maas went on to say that no one "should capitalize on these barbaric crimes to create hostility to refugees here in Germany."

Maas' remarks were echoed by Defense Minister Ursula von der Leyen, who told the Monday edition of the daily "Passauer Neue Presse": "We must not make the mistake now of confusing refugees with terrorists."

Vice Chancellor Sigmar Gabriel criticized a comment made by Bavarian Finance Minister Markus Söder, who on Sunday called for tough restrictions on immigration and justified his stance by saying: "Paris has changed everything."

Gabriel described Söder's statement as "the most erroneous sentence that anyone could say."

On Wednesday, prosecutors said a leading member of PEGIDA, Tatjana Festerling, was being investigated on charges of defamation and incitement, after she posted disparaging comments about refugees on Facebook.

PEGIDA's founder, Lutz Bachmann, is already facing charges of incitement from German public prosecutors after he described refugees and asylum seekers as "garbage" and "cattle" on his Facebook page.

The group, which was founded in Dresden, has inspired offshoots in other major German cities and even abroad. Its rallies have often met with spirited opposition from counterprotesters.

Supporters of far-right Pegida group held rallies in numerous German cities despite the anniversary of Kristallnacht. Thousands of counter-protesters have taken to the streets in response. (09.11.2015)