Supporters of far-right Pegida group held rallies in numerous German cities despite the anniversary of Kristallnacht. Thousands of counter-protesters have taken to the streets in response. 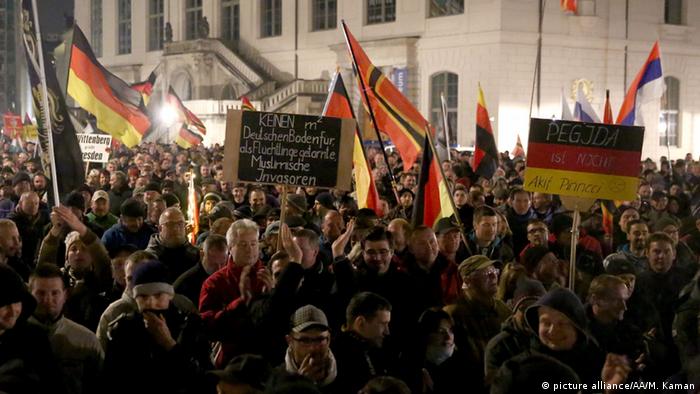 Pegida's decision to hold its weekly "evening stroll" and, thus, to ignore the signifiance of date was met with stark criticism on Monday night.

In Munich, around 3,000 Pegida opponents took to the streets, protesting against racism and xenophobia and calling to ban Pegida-related events on the anniversary of the "night of broke glass."

About 5,000 people turned out in Dresden, where roughly 6,000 Pegida supportesr had also taken to the streets.

Despite the counter-protests, Dresden's mayor Dirk Hilbert, who belongs to the liberal Free Democratic Party, has said that there was "no legal base" for cancellation, and stressed that he could not ban or relocate Pegida's marches.

On the night of November 9, 1938, coordinated Nazi attacks throughout Germany left thousands of Jews dead and their property destroyed.

A group of city officials sought a ban on Pegida's Monday demonstrations in courts, but were unsuccessful.

"November 9 is a day of sorrow in Germany. It serves as a reminder for us," said Christoph Heubner, a senior official of the committee of Holocaust survivors, on Monday.

In an online petition, more than 80,000 people protested the local government's actions.

An association of cultural institutions in Dresden said it was "incomprehensible" that Pegida was allowed to hold the march on Monday night.

"Kristallnacht is one of the darkest nights in the German history," the association was quoted by the regional Dresden newspaper "Sächsische Zeitung" as saying. "We cannot understand this decision and are sad and deeply ashamed. It shows that we are giving space to hatred."

Over the past year, Pegida has drawn intense media attention for its xenophobic sentiments and the presence of a pocket of right-wing extremists at its rallies. The growing refugee crisis has reignited the movement in recent months, with its supporters vehemently opposed to German Chancellor Angela Merkel's asylum policies

In May, Pegida organizer Siegfried Däbritz posed with NPD's chairman for Saxony, Frank Franz, for a photo in front of Dresden's synagogue.

Despite a drop in numbers at Dresden's PEGIDA march, the right-wing movement is showing no sign of disappearing from the city's weekly agenda just yet. DW's Kate Brady reports from Saxony's capital. (02.11.2015)