A right-wing smear against people who legally assist asylum-seekers has been named Germany's non-word of the year for 2018. The term, seen as defamatory and discrediting, was first used by Alexander Dobrindt of the CSU. 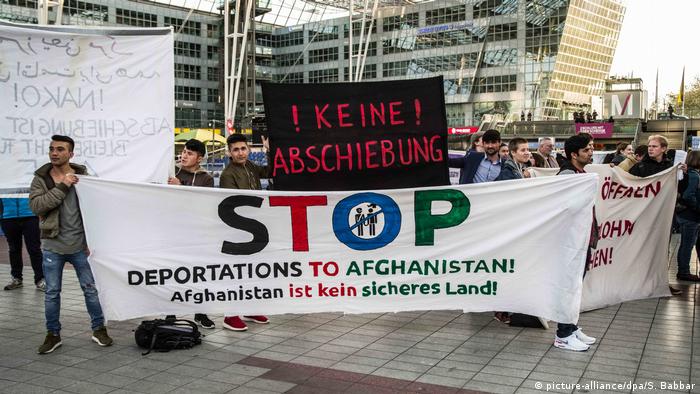 Nina Janich, a linguistics professor and spokesperson for the independent jury that selects the Unwort des Jahres ("Non-Word of the Year"), has announced the selection of this year's term, "Anti-Abschiebe-Industrie" ("anti-deportation industry").

The term was used by right-wing politicians and commentators in 2018 to refer to "those who legally support rejected asylum seekers and seek judicial review, and those who intend to protect refugees who have become criminals" — essentially, accusing them of making money out of support for deportees, said Janich in Darmstadt on Tuesday. She added that the jury found the descriptor defamatory and discrediting.

The selection of the Non-Word of the Year intends to promote a conscious use of language by pointing to terms that discriminate, mislead or violate democratic principles. The jury, consisting of four linguists and one journalist, this year received about 900 proposals from the public, including about 500 different expressions.

In 2017, the winner was the Donald Trump-inspired "alternative facts", while in 2016 the term "Volksverräter" ("traitor to the nation") came out on top, with the jury noting that the word is a "legacy of dictatorships," including that of National Socialism in Germany.

"Since at least 2015, the entire migration discourse and political communication in Germany has changed significantly," Janich said in an interview with the Süddeutsche Zeitung newspaper. "The discourse has moved strongly to the right. Non-words, so far mainly only used by [far-right] AfD politicians, are now used by politicians from other parties."

The most frequently submitted choice in 2018 was another anti-immigrant term, "Asyltourismus" ("asylum tourism"), used to imply that asylum-seekers are economic migrants who have no legitimate claims to stay in Germany. It was commonly used by politicians from the far-right Alternative for Germany (AfD), while Bavarian State Premier Markus Söder from the CSU also called for an end to "asylum tourism."

Other popular 2018 terms among the far right were "Ankerzentrum" ("anchor centers," or processing centers for refugees), and "Menschenrechtsfundamentalismus" ("human rights fundamentalism"), another term aimed at those trying to support refugee or asylum rights.

Such xenophobic political speak harks back to 1991 when the Non-Word of the Year was first chosen. That year, "Ausländerfrei" ("free of foreigners") became a pervasive term among German white nationalists in the wake of the Hoyerswerda riots in Saxony, during which neo-Nazis attacked refugees from Vietnam and other countries.

Activists trying to stop deportations, like 21-year-old Elin Ersson, are going so far as to prevent flights from taking off. Ersson's video on board a plane went viral, but she's not the first to use this tactic. (27.07.2018)

Each year, a jury of independent cultural representatives takes society to task. They find a word that is both detrimental to the German language and a sign of disrespect. This year? Sozialtourismus. (14.01.2014)