The term, first used by US President Donald Trump's White House team, beat out other offensive terms like "babycaust." The "non-word of the year" aims to raise critical awareness and combat abuse of human dignity.

The paradoxical term "alternative facts" ("alternativen Fakten") was selected from a final pool of some 80 offensive and erroneous terms to receive the title of "non-word of the year" for 2017 ("Unwort des Jahres"), Nina Janich, a linguistics professor and the press spokesperson for the independent jury behind the decision, announced in Darmstadt on Tuesday.

The term "alternative facts" was used on US President Donald Trump's second day in the White House by his adviser Kellyanne Conway to defend a lie told the day before by the White House press secretary about the size of the president's inauguration crowd.

According to the jury, "alternative facts" stands "for the growing practice of replacing facts with unprovable claims during the exchange of arguments."

"The term is a concealing and misleading expression for the attempt to make false claims acceptable in the mainstream by presenting them as legitimate in public debate," the jury stated in their reasoning.

The six-member jury awarded the Trumpian term the prize, selecting it over other words such as "babycaust," "fake news" and "Bio-Deutsche" (literally, "organic Germans," referring to Germans without any foreign ancestors).

After reviewing the "non-word" submissions from the public, which can come from all areas of public communication, the jury determined which of the suggestions would be selected as the winner for last year. The jury consisted of four linguists, one journalist and — for the first time since the prize's inception in 1991 — the anonymous German streetartist known as "Barbara."

The submitted words must violate democracy or human dignity, discriminate against a particular social group or be misleading or euphemistic.

All the eligible words must have current use and relevance. A total of 1,316 submissions were made, resulting in 684 unique terms, Janich told German media last week. Of these, the jury deteremined that between 80 to 90 met the competition's criteria. Janich said some 20 made up the closest final competitors. 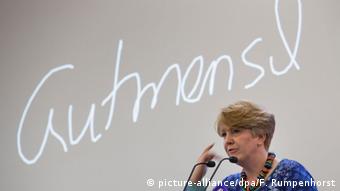 Janich announced 'Gutmensch,' or 'do-gooder' as the 2015 non-word

From 'babycaust' to 'fake news'

The most frequently submitted choice, "babycaust," refers to the controversy around German doctor Kristina Hänel, who was fined in November 2017 for "advertising" abortions. The doctor, who was attacked on a website of the same name, said the term was misleading due to its similarity to the word "Holocaust," in which over six million Jews were murdered.

"Organic Germans" ("Bio-Deutsche") has started being used to refer to Germans whose ancestors were born in Germany, in opposition to those who migrated to Germany. The term, a pun on the "bio" label that designates organic food in Germany, has surfaced from those opposed to migration.

"Fake news," "Speech police" ("Sprachpolizei"), and "Softwareupdate" are also on the final list for 2017.

The jury does not take into account the frequency of a submitted word when making its decision. Instead, the "language-critical action" of selecting a "non-word" is meant to highlight how language is used in public communication and raise awareness about words that violate human dignity and the principles of democracy, leading to a more critical population

The "Non-word of the Year" prize was first established in 1991 and remained under the aegis of the Society for German Language until 1994. Since that year, the jury has been independent.

Last year's "non-word" was "Volksverräter," or "traitor to the nation."

Every year, Germany's dictionary giant Langenscheidt selects the German Youth Word of the Year. In 2017, a new version of "I am" was singled out. Take a look at previous winners, as well as this year's candidates. (17.11.2017)

"Volksverräter" - traitor to the nation - has been named Germany's catchword of the year. The title is meant to raise awareness for awkward or ungainly expressions that are widely used in public discourse. (10.01.2017)

"Gutmensch," an overly politically correct person, has been named Germany's buzzword of the year 2015. The award pinpoints an awkward or controversial term that has shaped public discourse. (12.01.2016)