Political buzzword 'Jamaika-Aus' is German Word of the Year, 2017

In a year that has been full of political extremes, buzzwords that highlight government collapse, movements for marriage equality and women's rights are some of the German words of the year in 2017.

A political term that arose during the recent German election, "Jamaica-Aus," meaning Jamaica Out, has been chosen as Germany's Word of the Year for 2017.

It might sound strange to non-German ears, but the buzzword refers to the collapse of "Jamaica Coalition" talks between the Christian Democrats (CDU) and their Bavarian sister party, the Christian Social Union (CSU), the Free Democrats (FDP) and the Greens — the parties are respectively represented by the colors black, yellow and green, which also feature on the Jamaican flag.

Denoting the ongoing failure to form a governing majority in German, Jamaica Out was one of several political neologisms chosen by the Society for German Language (GfdS) on Friday for its Word of the Year, which has been awarded since 2009.

This year's runner-up is "Ehe für alle," or Marriage for all, which became a rallying cry on social media after gay and lesbian couples were finally granted full marriage equality in Germany —  including the right to adoption — on October 1.

Read more: Marriage for all: celebrities tying the same-sex knot

Number three was "#MeToo," a twitter hashtag turned global forum through which women shared their stories sexual harassment and abuse. These women were collectively honored this week as Time magazine's Person of the Year in 2017. 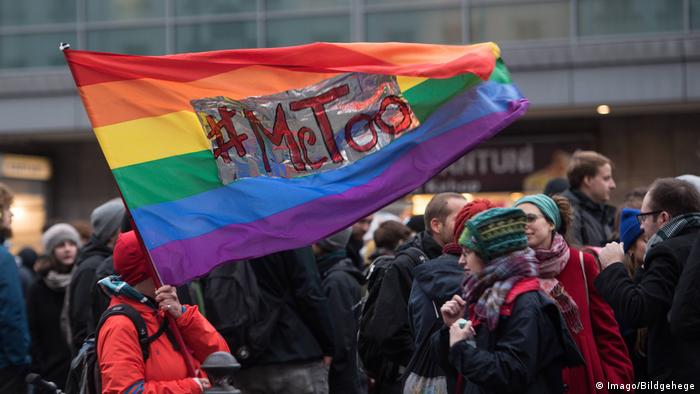 The "Me Too" hashtag, featured here at an October 2017 demonstration in Berlin, has become a global buzzword

According to the GfdS, Me Too drew attention to the extent of the problem, especially in the world of film and entertainment, with multiple women, for example, making sexual abuse allegations against Hollywood producer Harvey Weinstein.

When choosing the Word of the Year, the GfdS focuses on expressions or terms that have significantly shaped public debate over the calendar year. What counts is not the sheer frequency with which the terms have been used in the media, but rather their significance, and linguistic quality.

The winner of 2016 was "postfaktisch", or post-factual, the use of which became widespread in Germany during the US presidential campaign when Donald Trump triggered a public debate about post-truth politics and so-called 'alternative facts.' Prior to the rise of the buzzword late in 2016, the term "Brexit" was seen as a favorite.

German President Frank-Walter Steinmeier has signed a bill legalizing same-sex marriage in the country. The change in legislation will take effect as of October 1 at the earliest. (21.07.2017)

How German teens talk: Germany's Youth Word of the Year is 'fly'

Germany's dictionary giant Langescheidt announced the German Youth Word of the Year 2016 ("Jugendwort des Jahres"). The winner, however, is a term coming from the English language: "fly." (18.11.2016)