Dealing with post-truth politics: ′Postfaktisch′ is Germany′s Word of the Year | Culture | Arts, music and lifestyle reporting from Germany | DW | 09.12.2016

Dealing with post-truth politics: 'Postfaktisch' is Germany's Word of the Year

Every year, the Society for the German Language in Wiesbaden selects a term that reflects current political and social issues. "Postfaktisch," or "post-truth" politics was a phenomenon observed worldwide in 2016.

The Society for the German Language in Wiesbaden (GfdS) revealed its Word of the Year on Friday. The term "postfaktisch" was unanimously selected by the jury, said Peter Schlobinski, chairman of the association.

Translated as "post-truth," the attribute is used to describe a political culture based on emotions rather than facts, where the population is ready to accept outright lies. Such an approach has been forcefully demonstrated throughout 2016 - the most dominant examples being the Brexit referendum campaign in the UK and Donald Trump's presidential campaign in the US. 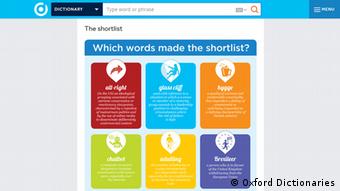 The English word had already been selected by Oxford Dictionaries as the International Word of the Year.

In second place was the word "Brexit," a shortened form of "British exit," referring to the United Kingdom's withdrawal from the European Union.

The third term selected by the society is "Silvesternacht," or New Year's Eve, in reference to the mass sexual assaults which took place in Cologne during last year's celebrations and which grabbed the world's attention.

Germany has been selecting a Word of the Year since 1971. Last year's word was "Flüchtlinge" (refugees). In 2014, the term was more celebratory: "Lichtgrenze" (border of light) refers to the wall of illuminated balloons that marked the path of the Berlin Wall and which were set free on the 25th anniversary of the Wall being toppled.

From the pope endorsing Donald Trump to Hillary Clinton arming "Islamic State," fake news has become a powerful force to reckon with. But supporters have lashed out at measures aiming to cut off its circulation. (17.11.2016)

Germany's top 10 Words of the Year

Post-truth, Brexit and the Trump effect: Along with its Word of the Year, the Society for the German Language lists the 10 terms that are widely used to comment on political and social issues. (09.12.2016)