How Elin Ersson and other European activists derail deportations | Europe | News and current affairs from around the continent | DW | 27.07.2018

Activists trying to stop deportations, like 21-year-old Elin Ersson, are going so far as to prevent flights from taking off. Ersson's video on board a plane went viral, but she's not the first to use this tactic. 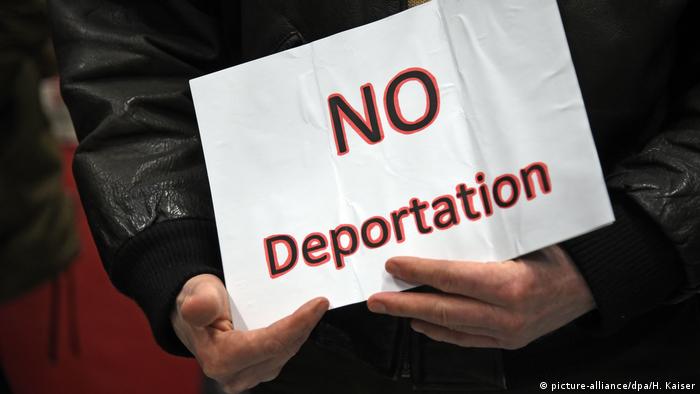 The activists network over groups and events on Facebook. On Monday, one such event dubbed "Stop deportations from Goteburg to Afghanistan" had 79 people "interested in going" and 13 people registered as "going." Among them was a 21-year-old student, Elin Ersson.

In an attempt to prevent the deportation of an Afghan man, Ersson refused to take her seat on board a Turkish Airlines flight destined for Istanbul. Her video of the protest received international attention. DW also published excerpts of the video, which were viewed more than 10 million times within the span of two days.

Thus far, there have been no other eyewitness accounts of what happened on board; the airline declined to comment when asked by DW.

In 2017 Sweden deported 415 people to Afghanistan. Elin Ersson belongs to a loosely connected network of activists from both big and small organizations in Europe, including European Citizens Against Deportation to Afghanistan, also known as ECADA, who all have one thing in common: protesting against deportations to Afghanistan.

There appears to be no umbrella organization overseeing it all. From time to time, the people behind similar protests are Facebook groups, such as "Don't send Afghans back — a platform of positive action." Sometimes it's just friends and acquaintances banding together.

Ersson's video was shared by hundreds of thousands of people, probably because it was emotional: It shows a young woman doing something that many people around her don't like. But Ersson wasn't the first to hinder a deportation in this way.

Before Ersson there was Eva Marta Granqvist. On July 17, Granqvist bought a ticket together with another activist and boarded a plane from Copenhagen to Istanbul. Also on board: a man slated for deportation. The 19-year-old Afghan was sitting in the back of the plane and was accompanied by security officers.

"We went to the back of the plane and heard him crying," said Granqvist. "We recognized him from pictures."

Other passengers stood up, wanting to know what was going on. Unable to depart with so many people out of their seats, the pilot decided after about 10 minutes to take off without the Afghan on board. The young man was allowed to disembark and, according to Granqvist, return to the deportation center. News of the case spread through the activists' YouTube video and further reports in Swedish newspapers.

Read more: The man whose deportation Ersson tried to prevent

'Who can be at the airport within an hour?'

According to Granqvist, the activists are in daily contact with people in the deportation centers. As soon as there's information about a forced removal from the country, various activist groups collect money for plane tickets. The next step is to figure out the point of departure.

"And then the question is who can be at the airport within an hour? Who lives nearby, who has the money and the passport?" she told DW.

But, like in Ersson's case, things don't always go as planned. She thought there would be two men on board, but one of them was put on a different plane that wasn't on the activists' radar.

Many people have praised Ersson and Granqvist as heroes, calling them "brave," while critics question their decision to get involved without knowing enough about the cases in question. Or as one person on YouTube put it, considering "their own views as more important than the law."

The problem with putting emotion first

It remains unclear why the man Ersson wanted to save was being deported. Swedish authorities told DW that they were not allowed to comment on ongoing cases.

Ersson knew neither the man nor his case. For the activist, the backstory appears to be irrelevant.

"It is my deep conviction that no one should be deported to a country at war," Ersson told DW.

Political scientist Andreas Heinemann-Grüder views Ersson's decision as based too deeply on emotion rather than on specific arguments.

"She didn't know anything about the case. Did he constitute a threat to society? Where was he going to be deported to? There are some places in Afghanistan that aren't dangerous," he told DW.

According to Heinemann-Grüder, protests devoid of enough facts can become heated in a hurry, and if they aren't well organized, they can fizzle out fast.

"It's very likely in this particular case that Elin Ersson won't achieve her goal because she can be discredited very quickly in light of a lack of professionalism. The whole thing could be written off as the work of a 'do-gooder.'"

Swedish police are assessing among other things whether Ersson broke the law. They have given no further statements about what her actions.

"That's a political discussion and we have no comment on it," a police spokesperson told DW.

Criticism of their approach is unlikely to hold Ersson and Granqvist back. Speaking at a press conference on Thursday, Ersson said that the whole point is to "change society."