Elin Ersson's video protest has gone viral: Millions of people have watched how the Swedish student stopped the supposed deportation of an Afghan refugee. Many have called her a hero; others have criticized the action. 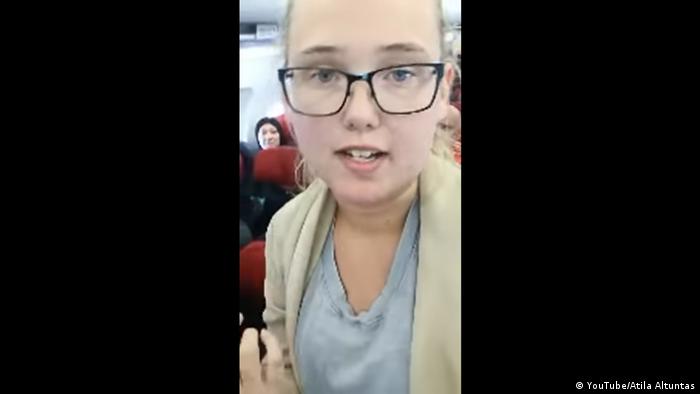 As every air passenger knows, a plane cannot take off until all on board have taken their seats and buckled their belts. On Monday, a young Swedish activist named Elin Ersson used that rule to keep a flight carrying an Afghan man who was reportededly being deported to Kabul from taking off from Gothenburg.

Ersson filmed her protest and streamed it live. The 14-minute video quickly went viral, with millions of internet users tuning in after it was posted. Ersson later gave DW permission to make its own shorter video from the original content. More than five million viewers have seen and distributed the DW video over the course of the day.
Watch here on DW Stories

'No one should be deported to a land at war'

DW contacted the 21-year-old Ersson, who is studying to become a social worker at the University of Gothenburg. She was vehement in her criticism of Sweden's deportation policies, specifically stating that authorities keep deportees in the dark as to what is happening and cut them off from their families and their lawyers.

Speaking of her motivation Ersson said: "Afghanistan is a land at war, but European countries continue to deport people to a place where they can't be sure if they will live for another day. ... It's my firm belief that no one should be deported to a land at war."

Ahmad Zaki Khalil, head of the Refugee Affairs Committee in Afghan Association in Stockholm, praised Ersson's courage in an interview with DW.

"In Sweden, authorities offer no information as to when a deportation is to be carried out," he said. "The rationale behind that stance is to keep demonstrations and actions like this from happening."

The flight that Ersson boarded was scheduled to travel to Istanbul, where the older man was to be transferred on to another plane to Afghanistan. With everyone else seated, the young Swede took out her cellphone and began livestreaming video on Facebook. She then proceeded to film herself speaking in English as she walked through the plane, explaining that the man was being deported to Afghanistan, "where he will most likely get killed."

As the video began, one could hear flight personnel ordering her to sit down, as well as angry passengers doing the same. Another flight attendant called for her to turn off the phone and take her seat, which she once again refused to do. Ersson insisted that she was not doing anything illegal, adding that as soon as the Afghan was taken off the plane she would follow the pilot's orders.

At one point, an English passenger chided her for her action and attempted to take her phone away, saying she was scaring the other passengers. About halfway through the video, other passengers began to join her in the protest. Among the cries of a number of children, she was told that the man would be let off the plane and she would also be removed by airport security.

Ersson protested Swedish deportation policy with a group of 25 other activists before boarding the plane. Her video was clicked more than 1.9 million times in the past 24 hours, and she has been applauded by many for her civil courage. Critics have called her selfish for single-handedly making a decision on the country's deportation stance.

Could face fines and jail

Though Ersson says she did nothing wrong, Swedish authorities see the matter differently. According to the Swedish Aviation Act, passengers who refuse to obey a pilot's orders while on board a plane can face fines or up to six months in jail.

When DW inquired about the fate of the Afghan man taken from the plane, Swedish authoriites would only say that policy prevents them from commenting on individual cases concerning deportations.

The German government plans to establish transfer centers to process migrants at the Austrian border. But what exactly are transfer centers? And are they compatible with German and European law? Here are the answers. (05.07.2018)

Nineteen people have arrived in Kabul after being deported from Germany. Protesters gathered at Düsseldorf airport before their departure to highlight that Afghanistan is not safe. (24.01.2018)