Anti-coronavirus protests: How safe is the German parliament? | Germany | News and in-depth reporting from Berlin and beyond | DW | 19.11.2020

Anti-coronavirus protests: How safe is the German parliament?

Aggressive demonstrators penetrated the Bundestag while parliamentarians were discussing the new Infection Protection Law, expanding government powers in the anti-coronavirus crisis. How was this disruption possible? 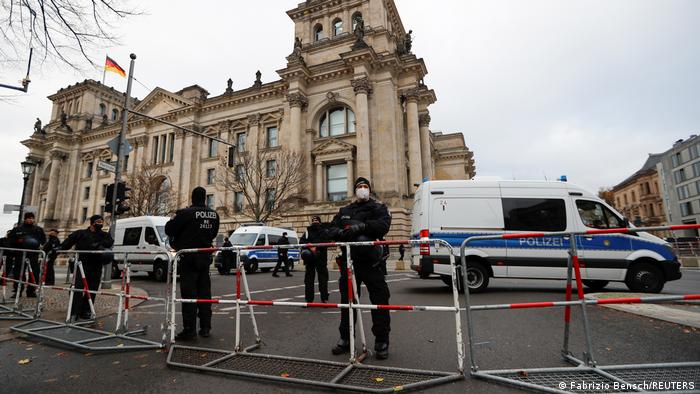 Security cameras captured unusual scenes on Wednesday inside the Bundestag: An agitated woman shouting at Economy Minister Peter Altmaier while filming him with her smartphone; another person joining in to threaten him. The minister, however, remained calm in the face of aggression.

In an interview with DW, Green MP Franziska Brantner quickly blamed members of the far-right opposition Alternative for Germany (AfD) for the situation: "It is outrageous that the AfD would bring people into the parliament building allowing them to harass and try to intimidate parliamentarians ahead of an important vote," she said. "This has to be investigated. We can not allow parliamentarians to be prevented from doing their job without disturbance."

Parliamentarians were quick to speak of an attack on the legislature. While they were debating the new Infection Protection Law inside the Bundestag, protests turned violent outside the building. Police used water cannons to dissolve the demonstration of thousands of protesters who were violating anti-coronavirus regulations. 200 protesters were arrested.

Read more: Can Germany's anti-coronavirus legislation be compared to the Nazis' 'Enabling Act'?

The parliament buildings and the surrounding area in central Berlin are a well-protected no-protest zone. There are exceptions, however, and demonstrations can be permitted if authorities see no threat of disruption.

The area between the main parliament building, the Reichstag, and the office buildings and ministries is cordoned off and not accessible to the general public. This is where the Berlin Wall separated East and West Berlin near the Brandenburg Gate; and only parliamentarians, ministerial employees, and other people with special security clearance can walk about.

The Bundestag has its own security personnel. The Parliamentary President — the post currently held by longtime political heavyweight Wolfgang Schäuble — is the top authority in charge of maintaining order in the building. It is possible for visitors to enter through a side entrance and during visiting hours, tourists can climb into the glass dome, from where they can sometimes see the debates taking place in the plenary chamber below.

Politicians may also invite groups of visitors from their constituencies, who may then spend half an hour in the visitors' stand to catch a glimpse of Chancellor Angela Merkel in action. Journalists are admitted too, and in the western lobby they can meet up with parliamentarians for interviews. The actual plenary chamber, however, is accessible only for parliamentarians and Bundestag staff.

Members of parliament may invite up to six individuals to their offices — this is what seems to have happened this Wednesday. The MPs are obliged to accompany their guests at all times, and to make sure they adhere to all rules and regulations and conduct themselves in a respectful manner.

This week, however, despite special strict regulations, the disruptive visitors — including a notorious far-right blogger — were removed from the building by police officers. They are now facing fines to the tune of several thousand euros. Major disruption of legislative proceedings can even carry a sentence of up to one year in prison.

What happened on Wednesday was thus extremely unusual. Security for the German parliament is tight. Regulations are regularly amended and tightened, in the face of mounting threats of terrorism — and aggressive protesters.