Ankara skittish over role in NATO alliance | Europe| News and current affairs from around the continent | DW | 14.05.2015

Russia threatens from the east, terrorism and anarchy dominate in the south. Which problem should NATO deal with first? Foreign ministers are meeting in partner country Turkey, as Bernd Riegert reports from Antalya. 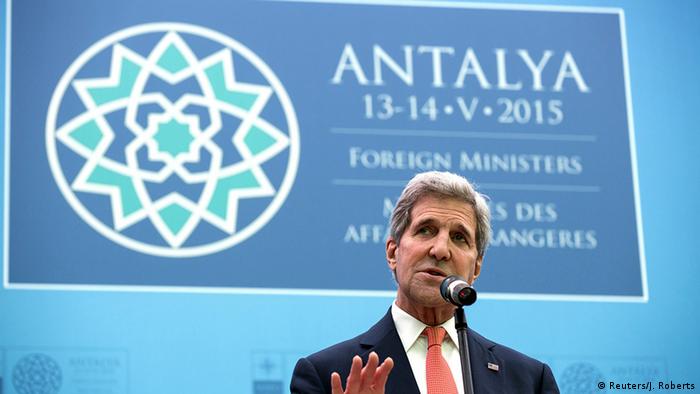 "We aren't worried about the trouble around us, we're more worried that the Russians aren't coming here anymore," says the receptionist of a chic beachfront hotel in Antalya, home to the press during the meeting of NATO's foreign ministers.

Antalya, in southwestern Turkey, lies about 800 kilometers (500 miles) from Syria, but political analyst Tarik Oguzlu assures DW that people here really don't feel threatened by the war and terrorism of the "Islamic State" (IS). He adds that "they are more worried about the economic crisis in Russia, than the fate of Ukraine."

"People do not assume that they will be attacked by Islamic terrorists," says the Turkish political scientist, who specializes in security policy at the Antalya International University. The other crisis to the east, Russia and the question of Ukraine, is not on their minds either.

Fight on the eastern flank

This year, hardly any Russian tourists have come to the large vacation resorts surrounding Antalya. Hotels, taxi drivers and souvenir dealers in Turkey, this year's NATO summit host country, are themselves feeling the effects of the Russian economic crisis, of sanctions resulting from the Ukraine crisis and of sinking oil prices. 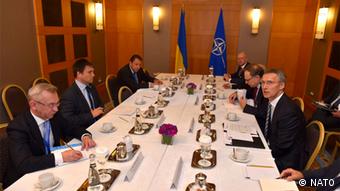 "The Turkish government thinks that NATO is spending too much energy on its eastern flank," says Oguzlu. According to some EU diplomats, NATO foreign ministers from southern countries like Italy are voicing the same criticism. In Antalya, however, Turkish Prime Minister Ahmet Davutoglu appeared outwardly determined when he announced that Turkey would participate in the "rapid reaction forces" designed to deter Russia, and to give eastern member states a sense of security.

NATO Secretary General Jens Stoltenberg thankfully acknowledged the offer, pointing out Turkey's geographic importance, and that it's the only NATO member state to border on Iran, Iraq and Syria - areas in part directly controlled by IS.

But behind the scenes, there are real arguments about Turkey's role in the alliance. Turkey's relationships to several Arab states, to Egypt and to Israel are bad. Turkey is also attempting to make its mark with its own foreign policy, and to position itself as a regional power vis-a-vis Iran.

The top diplomats from NATO nations have met with their Ukrainian counterpart to put the heat on Russia to speed up the truce in Ukraine. According to the bloc, Moscow has been building up its Black Sea military might. (13.05.2015)

The US Secretary of State John Kerry has arrived in Russia's Sochi to hold talks with President Vladimir Putin. The meeting is the first visit by a US official to Russia after violence erupted in Ukraine last year. (12.05.2015)

There have also been passionate discussions about whether or not it's still advantageous to be a NATO member state. "In Turkey there is a kind of anti-NATO, anti-Western sentiment. Not only among the elites, but also among the general population," says Oguzlu. Nevertheless, Turkey enjoys great importance as a NATO member, especially in light of the chaotic developments in the Middle East.

Officially, the government is firmly committed to the alliance. Davutoglu made that clear when he surprised heads of state and government by inviting them to return to Turkey for the summit after next, in 2018. Turkey's primary goal in the Syrian conflict is the removal of President Bashar al-Assad and his regime.

In the past, Turkey has supported rebel groups belonging to IS, and there have been reports of massive numbers of IS fighters from Europe and the US flowing into Iraq and Syria across the Turkish border. Turkey has denied these accusations, and in turn has called for more of a commitment from NATO.

NATO has already given Turkey a Patriot missile defense system, but Ankara has said this isn't enough. NATO foreign ministers are slowly coming to the realization that they cannot continue to concentrate solely on Russia and their eastern flank.

Turkey has also requested that NATO initiate a no-fly zone in northern Syria and Iraq. Thus far, the US and other NATO partners have been reluctant to do so, preferring to attack IS fighters, but not the Syrian army, with targeted airstrikes.

NATO to stay in Afghanistan

Naturally, Turkey does not want to see the Kurds, who desire their own country, strengthened in the muddled conflict. The Turkish prime minister pointed out that "the Syrian conflict is entering its fifth year," with 7 million Syrians now living in Turkey.

The conflicts stretching from the Middle East to Yemen are seen as inner Arabian disputes by many of NATO's foreign ministers, as sectarian conflicts between Sunnis and Shiites. "We are not about to start a crusade against any Muslim-led country," said a NATO diplomat.

In the end, the ministers were able to announce one formal resolution: the training and support mission in Afghanistan will continue into 2016. Stoltenberg announced that troop levels will be reduced from the 13,000 currently stationed in Afghanistan, and that the continuing mission will be headed by civilians.