The top diplomats from NATO nations have met with their Ukrainian counterpart to put the heat on Russia to speed up the truce in Ukraine. According to the bloc, Moscow has been building up its Black Sea military might. 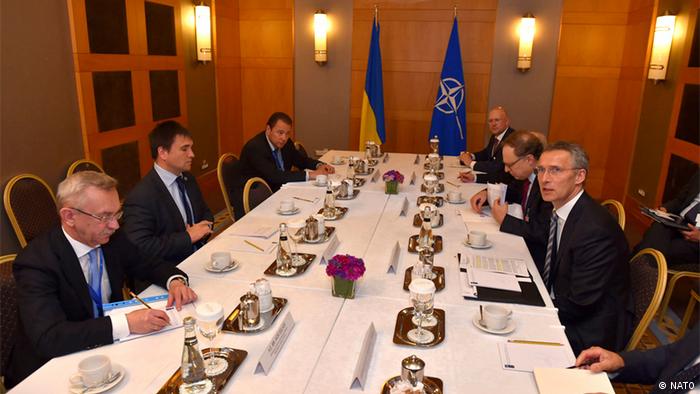 After meeting with Russian President Vladimir Putin in Moscow, US Secretary of State John Kerry was in Antalya, Turkey on Wednesday for a meeting of NATO foreign ministers to discuss the fragile ceasefire in eastern Ukraine.

The foreign ministers issued a warning that Putin should waste no time in fully implementing the peace deal to completely end hostilities in Ukraine.

"I think there was strong agreement among all of the NATO members that this is a critical moment for action by Russia, by the separatists, to live up to the Minsk agreement," said Kerry, adding that it was also imperative that observers from the Organization for Security and Cooperation in Europe (OSCE) be given complete access to the conflict zone in order to properly monitor the truce.

"The reforms, the election process, the working groups - this is an enormous moment of opportunity for the conflict there to find a path of certainty and resolution," Kerry added, calling on Putin and the pro-Russian rebels to "come together to work with" Kyiv.

A statement issued by the group voiced their worries over "Russia's ongoing and wide-ranging military build-up in Crimea" and the Kremlin's plans to bulk up their military presence all over the Black Sea.

Moscow "must stop its continued and deliberate destabilization of eastern Ukraine" said the 28 top diplomats.

NATO Secretary General Jens Stoltenberg also alluded to his own concerns that increased militarization on the Black Sea could herald "possible future stationing of nuclear weapons and development systems in Crimea."

Ukraine's own foreign minister, Pavlo Klimkin, who also attended the talks, said he felt a great deal of solidarity from the ministers, and that many had told him "if Ukraine fails, we all fail."

The meeting came one day after Kerry's meeting with Putin gave hope for a slackening of tension between Russia and the West. Ukrainian President Petro Poroshenko tempered these hopes on Wednesday, however, saying during a visit with German Chancellor Angela Merkel in Berlin that he saw "no progress" on the rebel's withdrawal of heavy weapons - a key point of the truce agreement signed in Minsk in February.

The United Nations estimates that more than 6,000 have died since clashes between the separatists and the Ukrainian military broke out in April 2014.