Angela Merkel has condemned recent attacks on media workers in Berlin, saying that press freedom is crucial for democracy. She said the coronavirus pandemic had shown the importance of "well researched information." 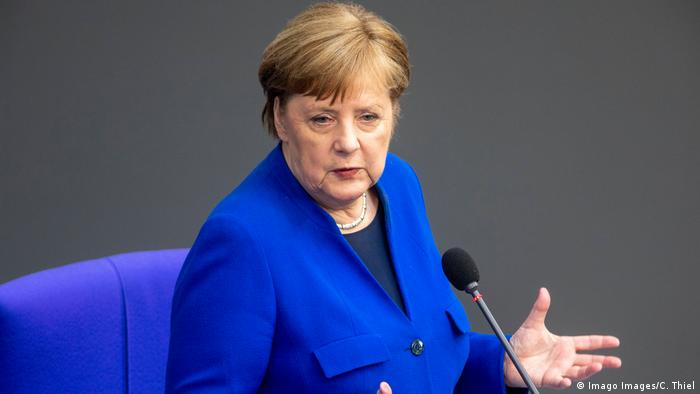 German Chancellor Angela Merkel used her weekly video podcast on Saturday to appeal for press freedom to be defended — especially during the coronavirus pandemic.

Democracy requires "a public sphere where you can argue and air differing opinions, in order to develop joint solutions to problems," she said. "This requires tolerance towards the opinions of others. But it also requires the ability to look at criticism of one's own opinions."

The chancellor said being able to see reality from different perspectives was key amid the coronavirus crisis: "Especially in this context, well-researched information is of great importance to us all."

Read more: German attack on journalists to be investigated for political motives

Attacks on the media

Attacks on TV news crews in Berlin during recent protests against coronavirus restrictions have led to concerns about media freedom in Germany. Right-wing groups, anti-vaxxers and conspiracy theorists have directed anger at what they call the Lügenpresse (lying press — a term in use since the 1800s but wielded most prominently by the Nazis), accusing journalists of failing to represent differing opinions in their reporting of the pandemic.

Merkel stressed in her podcast that the state of press freedom served as "an indicator of the state of our democracy as a whole."

"That's why it's all the more regrettable when, even here, in our democratic society, reporters and journalists are attacked," she said.

"Journalists must be able to look critically at the government and all political actors,"the chancellor added."A democracy needs facts and information. It has to be able to distinguish between the truth and lies."

Merkel also used her podcast address to commemorate the 75th anniversary of the publication of Germany's first newspaper after the end of World War II.

A scandal over police who blocked a TV crew at a far-right PEGIDA rally in Dresden continues to widen in Germany. The chancellor has also waded into the debate, coming to the defense of the reporters. (23.08.2018)