The German chancellor has condemned the ongoing repression of protesters in Belarus, calling for the release of political prisoners and announcing further means of German support. 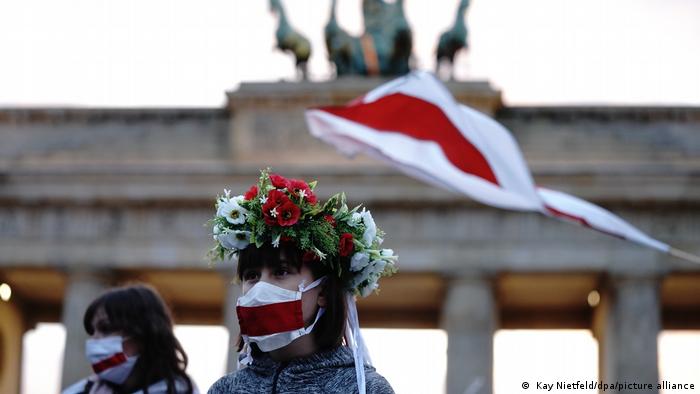 Merkel said she was 'deeply impressed' by the movement in Belarus

German Chancellor Angela Merkel has called for an end to repression of the democratic movement in Belarus.

Authorities in Belarus have cracked down on protests since August, as people march against President Alexander Lukashenko.

"Germany and the European Union will continue to hold those responsible for the ongoing human rights violations in Belarus to account," Merkel said in her weekly podcast on Saturday.

In November, the European Union imposed sanctions on Lukashenko and other government officials in Belarus.

Merkel expressed support to the peaceful protesters in Belarus, describing their democratic movement as "admirable perseverance against electoral fraud."

Protesters in Belarus have repeatedly marched against Lukashenko since he claimed a landslide victory in August, with the opposition accusing him of electoral fraud.

"The calculation by those in power seemed to be that the world would forget these brave people. We cannot let that happen," Merkel added.

Demonstrators in Belarus not giving up

Merkel also announced further measures that Germany would start offering to Belarusians in humanitarian need, including easier access to visas, scholarships and support to independent media.

"This will not decide the conflict between rights and repression [in] Belarus," she said. "But it shows the brave people there that we're on their side and are listening, today, just as half a year ago."

What is the political situation in Belarus?

The opposition in Belarus has refuse to recognize the victory of Lukashenko, who has been ruling the country since 1994.

The front-runner against Lukashenko in the August vote, Sviatlana Tsikhanouskaya, has since the election lived in exile in Lithuania, where she continues to support almost weekly protests in Belarus.

Human rights organizations have raised concerns amid accusations over Belarus' human rights abuses, including torture of political prisoners and persecution of journalists.