The German chancellor has appeared at a parliamentary inquiry to defend her decision to lobby on behalf of the disgraced banking firm Wirecard in China. The scandal is one of Germany's biggest ever fraud cases. 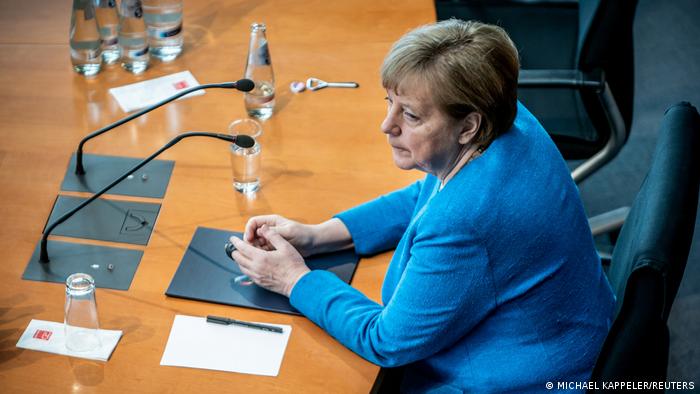 Chancellor Angela Merkel has told the German Bundestag that there was no reason to believe that Wirecard was committing fraud in 2019, when she lobbied on behalf of the now insolvent Bavarian company during an official trip to China.

"Despite the press reports, there was no reason to assume there were serious irregularities at Wirecard at the time," she told a parliamentary inquiry during a hearing on Friday.

Merkel has become the fourth senior government politician to be questioned by the cross-party committee of parliamentarians since last year, when it emerged that there was a €1.9 billion ($2.3 billion) hole in the former DAX-listed company's finances.

CEO Markus Braun remains in custody, accused of fraud, market manipulation, and money-laundering, while COO Jan Marsalek has gone into hiding, reportedly in Belarus, and is now on Europol's wanted list. Investors in the company are thought to have lost most of their money.

Merkel insisted on Friday that promoting German firms hoping to break into the Chinese market was a normal part of her state trips to Beijing, and that "Wirecard AG did not enjoy any special treatment during the trip," the DPA news agency reported.

At the time, Wirecard was planning to take over a Chinese financial tech company named AllScore Financial. The company has since been criticized for aggressively acquiring other businesses, often at above market value, to disguise its own failure to grow organically.

At least some of the opposition politicians on the inquiry were dissatisfied with the chancellor's answers. Fabio De Masi, of the socialist Left party, said Merkel's testimony still left "many open questions."

"When you visit the most powerful man in China, you don't lobby for any french-fry stand," he told Reuters news agency. "And you don't have 10 or 15 issues, but two or three."

The Green party's Danyal Bayaz said that the timing of Merkel's trip was crucial, because, he told reporters, by then there were already publicly-available warnings that the company was not right.

Before Friday's hearing, Florian Toncar, parliamentarian for the pro-business Free Democratic Party (FDP), said Merkel was unwittingly complicit in creating a situation where Wirecard's fraud could continue without scrutiny.

"I think not deliberately, not intentionally, but in fact, the chancellor supported —  in effect at least — the continuation of the balance sheet manipulation," he told DW Business. "And this is, of course, politically a mistake."

Quadir, who appeared before the Bundestag's Wirecard committee herself, says the failure of authorities to address allegations of irregularities led Wirecard executives to act with impunity.

"They really felt that they could get away with everything because every time something new came out, it's almost as though it didn't happen. It was simply forgotten," she said. "These various allegations were never really properly investigated by the securities regulator or by the Bavarian prosecutor."

Lobbied by a lobbyist

For many, the Wirecard affair has illustrated the culture of complicity that exists between blue-chip German businesses and the political establishment.

Merkel's former Defense Minister Karl-Theodor zu Guttenberg has come under particular scrutiny, as he was a lobbyist for Wirecard in 2019. Merkel confirmed to the committee on Friday that she had a 45-minute conversation with zu Guttenberg before her trip, but could no longer remember whether Wirecard had been mentioned.

"For me it is normal to accept requests for conversations from former members of my government," Merkel said.

This week has been considered the climax of the Wirecard parliamentary inquiry, which has already convened for more than 300 hours and reviewed hundreds of thousands of pages of documents.

Finance Minister Olaf Scholz appeared before the committee on Thursday to defend his own position as ultimate head of Germany's financial oversight authority, BaFin, which came under special criticism following the scandal.

Scholz, who is running as a Social Democrat chancellor candidate in this year's election, said he had implemented reforms and strengthened BaFin's powers as a direct consequence of last year's events.