An unpleasant surprise for the US in Libya | World | Breaking news and perspectives from around the globe | DW | 27.08.2014

An unpleasant surprise for the US in Libya

Washington is displeased with the air strikes it says the United Arab Emirates and Egypt conducted on Islamist militias in Libya - especially since it appears both countries tried to keep their US allies in the dark. 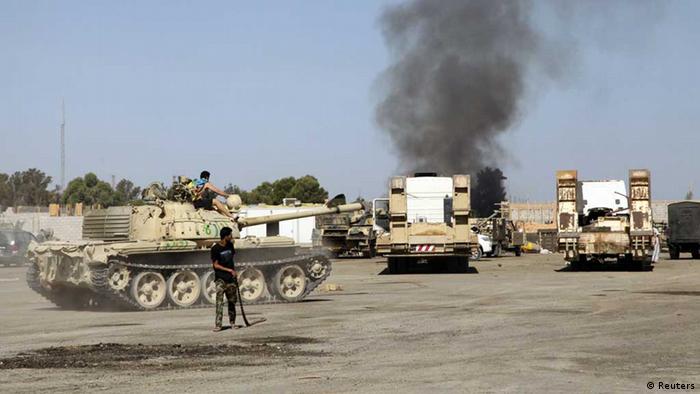 Violence in Libya between rival factions has surged recently

"We do believe there were air strikes undertaken in recent days by the UAE and Egypt inside Libya," Pentagon spokesman Rear Admiral John Kirby said at a news conference in Washington on Tuesday. The State Department reacted similarly, confirming the attacks but not saying whether the US was notified in advance - leading to an assumption that the country knew nothing of the strikes.

Several US officials are also being quoted in media reports saying Washington had been caught off guard by air strikes carried out by the UAE using Egyptian air bases. The lack of notification amounts to diplomatic embarrassment for the United States, since the UAE and Egypt are considered to be American allies. Washington is a significant provider of military aid to Egypt and is regularly involved in arms sales to the UAE.

Secret air strikes are "an astounding and unusual action," said William Lawrence of the Elliott School of International Affairs in Washington, adding that the US would not have approved of the move.

That view was supported by comments from State Department spokeswoman Jen Psaki, who said, "We believe outside interference exacerbates current division and undermines Libya's democratic transition." 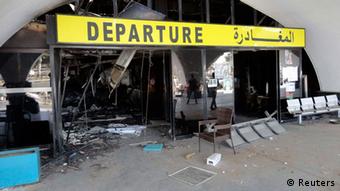 Islamist forces seized a key airport in Tripoli on the weekend

The air strikes drew further criticism from the newly appointed UN envoy to Libya, Bernardino Leon: "Any kind of intervention or foreign intervention won't help Libya get out of chaos." Instead, Leon argues that only an inclusive political process with all Libyans represented in parliament, government and other state institutions would improve the situation.

Egypt's Foreign Minister Sameh Shoukry on Tuesday denied any "direct" role by his country. Emirati officials have not commented. The Emirates and its Gulf neighbor Qatar played the most prominent roles among Arab nations in the military intervention that helped lead to the ousting of Libyan dictator Muammar Gadhafi, with both sending warplanes to assist the NATO-led effort.

Former Ambassador to the UAE David Mack told DW that it would be plausible for the country to be involved in the air strikes. "The UAE looks, with a number of other Arab countries, with considerable dismay upon the evolution of politics in Libya," Mack said. "The UAE is a big backer of the regime in Egypt that brought an end to the political role of the Muslim Brothers, and they certainly have been unsympathetic to the more Islamist parties and militias in the Libyan struggle for power.”

Mack calls for a political dialogue among the major rival factions in Libya, saying, "They have to establish their identity as a nation - something that they hadn't been able to do during the period when they were just kind of a personal chiefdom of Muammar Gaddafi."

The former ambassador says that EU member states, as Libya's main trade partners, have a particularly high stake in the country's future. "The European Union has really got to pay a lot of attention to what Winston Churchill referred to as 'the soft underbelly of Europe.' And in this case, countries like Germany, who are very important economic partners of Libya, need to be paying a little bit more attention to it." 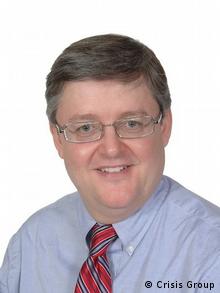 Lawrence: Include the Islamists in talks, but don't let them take lead

In a joint statement on Monday, the United States and the four largest EU members - Britain, France, Germany and Italy - urged outsiders not to interfere in Libya. In the statement, the countries welcomed discussions to be held by the UN Security Council in the coming days.

US' lack of credibility in region

Libya expert William Lawrence agrees that Security Council talks need to take place, saying, "Libya needs to be stabilized and hasn't been able to do so on its own." Instead, Lawrence tells DW, a UN mission is needed to help the country establish reliable political institutions and an inclusive government: "We need a political dialogue that includes the Islamists but doesn't let them take the lead."

Lawrence says that Washington would prefer to have its international partners take the lead in the effort, since the US currently suffers from a lack of trust by some key players in the region. Lawrence claims the desire for an international effort explains the issuing of the joint statement by the US and its European allies.

"The faster we can stop the violence, the better," Lawrence says.

Egyptian President Abdel-Fattah el-Sissi has denied military involvement in Libya after Cairo was implicated in a deadly airstrike against Islamist militia. Jihadists have accused Libya's parliament of complicity. (24.08.2014)

Libya is experiencing its fiercest fighting since the fall of Moammar Gadhafi. Its new parliament has little authority. With various militias fighting one another, the political transition is on the point of collapse. (25.08.2014)