The international rights group has condemned Malta for "unlawful" treatment of migrants in the Mediterranean. The UN has also called on Malta to allow 27 refugees currently on a cargo ship to disembark. 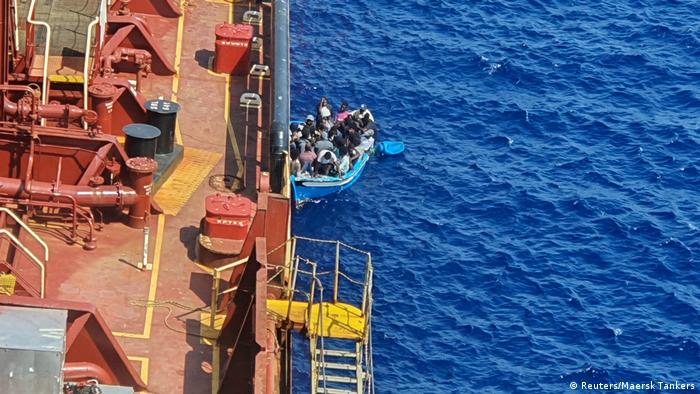 Amnesty International condemned Malta Tuesday for "illegal tactics" in the Mediterranean against immigrants attempting to cross from North Africa.

The Maltese government's approach may have led to avoidable deaths, the rights group argued, in a new report. The report was published hours after the UN called on Malta and the EU to work to end a humanitarian crisis aboard a cargo ship off the island nation.

"The Maltese government had resorted to dangerous and illegal measures for dealing with the arrivals of refugees and migrants at sea," said the rights group.

"The escalation of tactics included arranging unlawful pushbacks to Libya, diverting boats towards Italy rather than rescuing people in distress and illegally detaining hundreds of people in ill-equipped ferries off Malta's waters," Amnesty said in the report.

Malta and Italy closed their ports to migrants in April as the coronavirus pandemic led to widespread lockdowns across the two countries. Malta said it needed all its resources to fight the disease.

Malta has received 2,161 illegal immigrants in 2020 — a number that Amnesty admits requires "considerable" resources "for such a small country."

Teacher works to give refugee children a brighter future

But this did not "relieve Malta of the responsibility to indicate a place of safety for the people rescued under its coordination," Amnesty said.

Many of the refugees to Malta are escaping persecution in war-torn Libya.

A cargo ship carrying 27 rescued migrants was denied permission to dock this week.

The UN's refugee agency "called for immediate disembarkation of the people trapped on board the ship."

The Maltese government denied any responsibility for the Maersk Etienne cargo ship as it is sailing under the Danish flag.

"While I understand the humanitarian access of migration, I have to understand the interests of the Maltese," Prime Minister Robert Abela told local press.

Malta has bowed to pressure and allowed 425 migrants to disembark four boats kept at sea for a month. PM Robert Abela cited a gas cylinder threat, activists' suicide bids, hunger strikes and illness for the decision.