Amnesty International: The good, the bad and the ugly? | World | Breaking news and perspectives from around the globe | DW | 28.05.2021

Amnesty International: The good, the bad and the ugly?

For the past 60 years, Amnesty International has put its finger in the wound of human rights abuses in all shapes and forms around the world. But it's also faced widespread criticism for some of its more opaque actions.

"It is better to light a candle than to curse the darkness."

Little did Peter Benenson know at the time that an article he wrote in 1961 would come to shape Amnesty International's code, encapsulated in the words above.

On May 28, 1961, the London Observer published an article entitled "The Forgotten Prisoners," penned by the British lawyer. Perusing the morning papers, he had come across an article about two Portuguese students who were jailed after raising their glasses in a toast to freedom in a restaurant. At the time, Portugal was ruled by the dictator Antonio de Oliveira Salazar.

Outraged by their detention, Benenson in his piece called for their release and urged readers to write letters to the Portuguese government. But Benenson didn't stop there. His article also listed other human rights violations around the world. He used the term "prisoners of conscience" to highlight the plight of "any person who is physically restrained (by imprisonment or otherwise) from expressing … any opinion which he honestly holds and does not advocate or condone personal violence."

His campaign, Appeal for Amnesty 1961, was effectively the precursor to what would become Amnesty International.

The organization's initial focus of work — forgotten prisoners — gradually expanded as part of its development "from mandate — to mission." In the 1970s, it focused on the treatment of prisoners in several Latin American dictatorships, launching campaigns against torture and the death penalty.

For its work against torture, Amnesty was awarded the Nobel Peace Prize in 1977.

New issues emerged in the 1980s, including extrajudicial killings, political killings and forced disappearances. Toward the end of the decade, it turned its attention to the growing number of refugees around the world.

In the 1990s, Amnesty International honed in on armed conflicts, uncovering atrocities in East Timor, Rwanda, and the former Yugoslavia. As of the 2000s, there was a shift in its focus towards naming and shaming economic and social injustices that stemmed from the growing effects of globalization.

The impact of its work in its first 30 years was very different to that it has and could have today, says Dr. Anja Mihr, program director of the HUMBOLDT-VIADRINA Center on Governance through Human Rights, and a former board member and chairman of Amnesty International Germany.

"Amnesty International, in the early years, developed the mechanisms of raising awareness, calling on governments and the public through letter-writing campaigns. And therefore, during these first 30, 40, maybe even 50 years of its work, it didn't matter so much whether Amnesty International, with its actions, would actually cause a direct response from governments."

Of course, the world has changed dramatically since those times, not least due to globalization and the era of information technology.

"I'm not always sure whether the strength of Amnesty of doing good research, having evidence, is still needed to the same extent today where we have many other entities [such as NGOs and researchers] ... We have other means of finding out what is happening on the ground. We don't need an NGO anymore to tell us what is happening in Myanmar or what is happening in China or elsewhere," says Mihr. 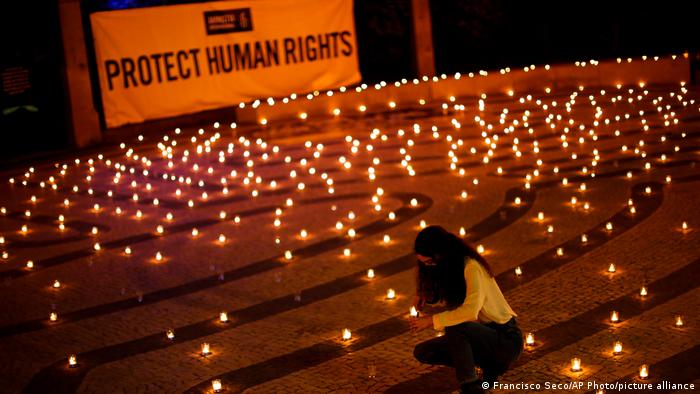 Not all that glitters is gold

It hasn't all been smooth sailing for Amnesty over the last 60 years. It claims that it doesn't pursue political ideology or "support or oppose any government or system." However, its detractors say that is precisely what it is doing. There have been allegations of one-sided reporting, or a failure to treat threats to security as a mitigating factor.

Part of the problem is that the organization is stuck in the past, says Stephen Hopgood, professor of international relations at SOAS University of London, who specializes in the international politics of humanitarianism and human rights and is author of the book "Keepers of the Flame: Understanding Amnesty International."

"Amnesty is a Cold War-era organization, and the way it was set up and the way in which it functioned, it's a miracle it survived for 60 years in many ways. And it doesn't necessarily represent a failing on Amnesty's part, more a sort of inevitable complexity in a world that's a lot different than the world of the 1960s and the 1970s."

Some of the strongest criticism pertains to its alleged foreign policy bias against either non-Western countries or Western-supported countries. However, Hopgood says that kind of assessment needs to be put into the perspective of the time.

"It was one of the few international organizations campaigning on the principle of freedom of expression. And it tried to do that in the most neutral, fairest way it could by picking prisoners of conscience from the West, from the East and from the developing world ... It was in many respects a very simple time when Amnesty could see who the enemy was, and the enemy was authoritarian governments everywhere."

The policy of neutrality and taking up a position that doesn't take sides has become increasingly difficult to maintain due to today's complex challenges.

"Take the recent war between Hamas and Israel: If you come up with what you think is a neutral position, one response is to say it's terrible when innocent civilians are injured anyway. But those people who are either strongly pro-Israel or strongly pro-Palestinian see this as siding with the enemy, if you're not with us, you're against us effectively. How can the stakes be equal when Israel is so much more powerfully armed and so much more in control?," says Hopgood.

A new era of priorities

In essence, there's been a shift from an era when human rights were viewed as neutral in conflict and war situations — or the way certain governments treated their citizens. And to some degree that is no longer applicable in today's world, say experts.

"That world has been overtaken by popular mobilization around a whole range of deeply problematic and complex issues, such as sex work or abortion ... Both sides will often claim human rights as part of their ideological or ethical position," says Hopgood.

Beyond that, a report published in 2019 found that Amnesty International has a "toxic" working environment, with incidences of bullying, public humiliation, and discrimination. Such problems are often inherent in complex and bureaucratic organizations that bring together people with different perspectives and ethics.

In his book, Hopgood describes how personal sacrifices for a good cause can take their toll, especially without a supportive working environment.

"People would spend two months interviewing prisoners in horrendous prison conditions who have been tortured, and then come back. And nobody in the central organization would want to hear that. You have to keep two months worth of torture inside, write it up and put it out. And you have to live with knowing that for every torture victim you do something positive for, there are tens of thousands of others. And if after all of this, you have a drink at the hotel bar next to the prison where there are people being tortured, that takes a terrible toll on people.

"I think Amnesty is a good example of that kind of deeply ethical but deeply problematic culture."

It is yet to be seen how Amnesty will fare over the next 60 years. Amnesty's role will be shaped by the political landscape in which it finds itself.

"How can we have the biggest and strongest impact? Is it still by raising awareness? Is it still by calling on governments predominantly? Are those who are responsible for human rights violations and those who can change the situation on the ground in favor of human rights still the same actors as 20 or 40 years ago? I would say no. I think the scenery has changed. And so Amnesty's methods have to adapt to the current situation," says Mihr.

From defending political prisoners to lobbying against global arms trade control — here's how a lawyer's initiative grew into a leading network of human rights activists.