Amnesty decries growing intolerance towards dissent in Asia | Asia| An in-depth look at news from across the continent | DW | 24.02.2016 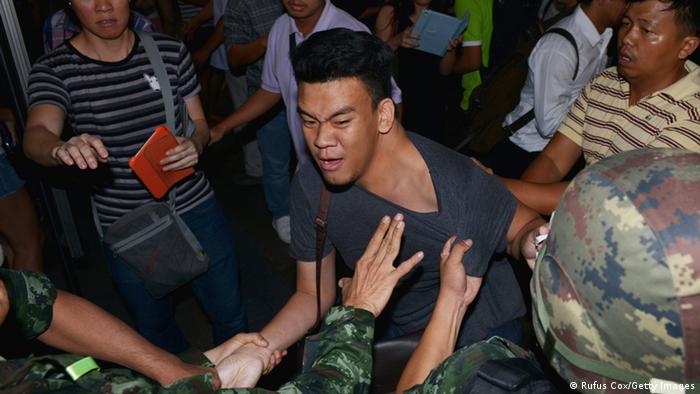 "Your rights are in jeopardy," warned Amnesty International (AI) as it launched its annual assessment of human rights around the world. "Not only are our rights under threat, so are the laws and the system that protect them," said AI's Secretary General Salil Shetty.

Released on Wednesday, February 24, the 400-page report provides an overview of the human rights situation in 160 countries in 2015. The authors claim that there is a global trend of undermining human rights, which has come from governments "deliberately attacking, underfunding or neglecting institutions that have been set up to help protect our rights." 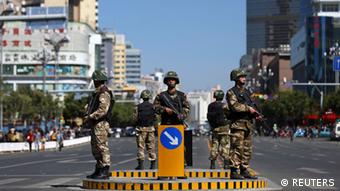 In this context, the situation in the Asia Pacific is particularly bleak as repression of dissent has become an "alarming and intensifying trend" in the region, Champa Patel, AI director for South and Southeast Asia, told DW, adding that the very people fighting to uphold the rights governments are meant to protect have come under sustained attack in several Asian countries.

The states' failure to ensure accountability along with a sense of widespread impunity remain the drivers of human rights violations in these countries. For instance, in Thailand - which has been ruled by a military junta since mid-2014 - authorities abused the judicial system to stamp out peaceful dissent or criticism, the report pointed out. Students, journalists and academics were arbitrarily arrested and held in secret detention.

The massive crackdown against human rights lawyers in China is another example. Since last July, Chinese authorities have arrested over 200 lawyers and activists, who were questioned and detained, while many of their offices and homes were raided.

Besides arbitrary arrests, intimidation and harassment, many governments in the Asia Pacific also introduced legislation claiming to ensure "national security," which rights groups criticize as a means by the authorities to silence dissent.

Australia's High Court has upheld Canberra's right to detain asylum seekers offshore. Hugh de Kretser, from the Human Rights Law Centre, which represented the plaintiff in the court case, talks about the implications. (03.02.2016)

In Malaysia, the Sedition Act was amended last year, with the scope of offences increased to cover electronic media. The amendment also allows for tougher penalties such as mandatory and increased prison sentences. The report says that at least 15 people were charged under the Act over the past year, including political cartoonist Zulkiflee Anwar Haque.

"The Sedition Act is a colonial era relic that gives the authorities sweeping powers to crack down on any 'inconvenient' individuals, and it must be repealed immediately," said AI's Patel.

In China, the criminal charge of "picking quarrels and provoking troubles" continued to be used to arrest and detain political activists, lawyers and worker rights advocates.

Five women's rights activists were arrested under this charge in March because of their plan to launch a campaign against sexual harassment. In December, prominent lawyer Pu Zhiqiang was put on trial for the same reason. Also charged with "inciting ethnic hatred" in connection with comments he made on social media, the lawyer was given a three-year suspended sentence.

Beijing also enacted a controversial national security law in July, which covers areas such as politics, culture and finance. Critics point out that some of the charges included in the law such as separatism, inciting subversion and leaking state secrets - a charge which led to the conviction of former DW journalist Gao Yu in April - could be used to further suppress rights defenders.

And as AI indicates, these charges are also aimed at deterring online rights activism, a move that has gained momentum in recent years in the Asia Pacific. In this context, Patel points to China's draft Cyber Security Law as a means to crack down on online criticism of the authorities. "It contains vague and imprecise terms such as 'upset social order' and 'harm national security', which could be used to further restrict freedom of expression," he told DW.

But such repression is not limited to China. In Thailand, the AI report says, authorities penalized scores of individuals for publishing comments on Facebook deemed to be insulting to the monarch. Some of these individuals were reportedly sentenced to up to 60 years in jail.

Another example is Cambodia. Ever since the government introduced the so-called "Cyber War Team" last year, there has been a surge in the number of criminal charges relating to comments made on the Internet. For instance, a student was arrested in August after writing on Facebook that he planned to initiate a "color revolution".

Moreover, the report accused some governments, such as that in Bangladesh, of failing to provide adequate protection for citizens' freedom of expression. 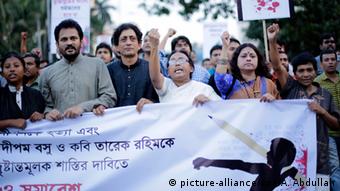 'Bangladesh has become increasingly dangerous for those speaking their own minds,' says AI

"Bangladesh has become increasingly dangerous for those speaking their own minds," said AI. In recent months, the South Asian nation has seen a number of attacks on bloggers and publishers carried out by suspected religious fundamentalists.

In 2015, for instance, a total of four atheist bloggers were killed for their writings criticizing Islam, leading rights groups to slam the Bangladeshi authorities for what they view as a "passivity" which has "fostered a climate of impunity that is extremely dangerous for citizen-journalists."

Patel also warned about Dhaka's plans to push through legislation which, if passed, would alarmingly increase the government's control of the NGO sector.