Russia's lower house voted 293-45 in favor of the draft legislation, which would prevent members of "extremist" organizations from becoming lawmakers. Navalny's FBK is on the verge of being added to that list. 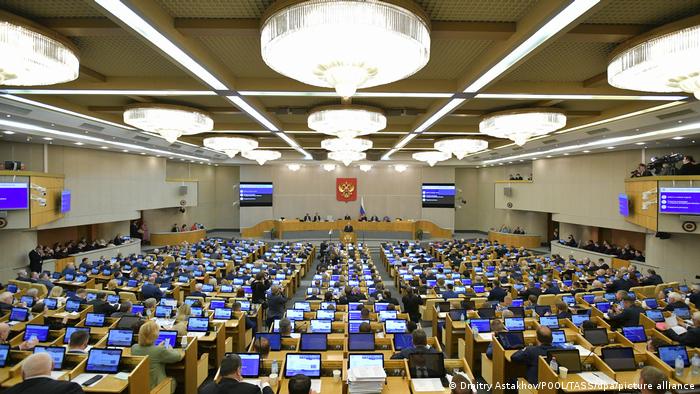 The State Duma overwhelming supported the motion to ban 'extremist' organizations from standing at elections.

Russia on Tuesday moved a step closer to banning members of "extremist" organizations from elections, with a keen eye on affiliates of the jailed Kremlin critic Alexei Navalny.

Lawmakers in the State Duma — Russia's lower house of parliament — voted 293-45 in favor of the draft legislation, with two deputies abstaining.

The vote is part of broader efforts by authorities to extinguish the activities of Navalny, who is currently serving two-and-a-half years in a penal colony outside Moscow. He was found of violating the terms of his parole on a previous fraud conviction upon his return to Russia from Germany earlier this year. But Navalny says that his prior conviction and his latest incarceration are politically motivated.

A trial is set to get underway in June to decide whether to add the Kremlin critic's network of regional offices, and his Anti-Corruption Foundation (FBK), to a list of "terrorist and extremist" organizations.

With parliamentary elections scheduled for September, Navalny had been hoping to roll out his Smart Voting strategy, which calls for citizens to cast their ballots for the candidate most likely to defeat Kremlin-linked opponents in their respective regions.

But the proposed legislation would put a stop to those political aspirations.

If the bill goes on to be passed by Russia's upper house, and then signed into law by President Vladimir Putin, as it is expected to be, it would bar leaders of so-called extremist groups, such as Navalny's FBK, from standing in parliamentary elections for the next five years.

It would also block members of the groups, as well as people who help finance such organizations, for three years.