The first visit to Belgrade by an Albanian premier in seven decades has resulted in a public row over Kosovo. The two sides had been hoping to use the meeting to open a more harmonious chapter in their troubled ties. 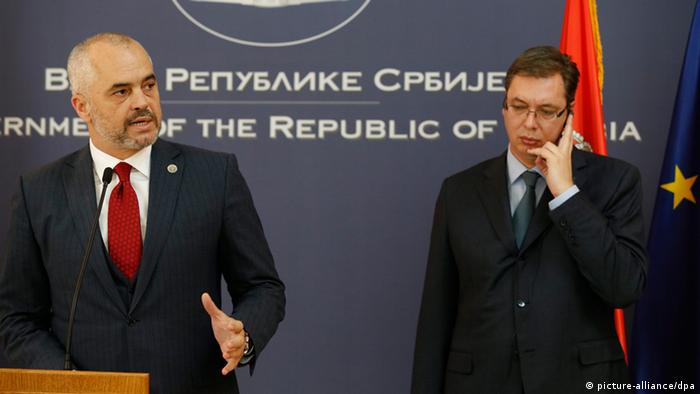 Albanian Prime Minster Edi Rama and his Serbian counterpart, Aleksandar Vucic, clashed over Kosovo during a joint press conference following their meeting in Belgrade on Monday.

"We have two entirely different positions on Kosovo, but there is one reality and this is irreversible," Rama said. "Independent Kosovo is an undeniable regional and European reality, and it must be respected."

A visibly angered Vusic described Rama's statement as an act of "provocation."

"According to the constitution Kosovo is Serbia and I am obliged to say that no one can humiliate Serbia," Vucic said.

"I'm sorry, but that is the reality that many recognize," Rama replied. "The sooner you recognize [this], the sooner we can move ahead."

Prior to the talks, both Belgrade and Tirana had expressed the hope that they could use the meeting to do just that - move ahead despite the many issues that divide them, with Kosovo being one of the most serious.

Serbs regard Kosovo the cradle of their nation, and it was a southern Serbian province until a NATO bombing campaign ended inter-ethnic fighting in 1999. Following almost a decade under United Nations administration, Kosovo unilaterally declared its independence in 2008 and has since been recognized by most European Union countries as well as the United States.

Albania supported Kosovo's split with Belgrade, but Serbia has said that it will never recognize it as a separate state. Despite this, Belgrade has pledged to normalize relations with Pristina as part of EU-mediated talks.

Tensions were raised again last month, when a drone swept into a Belgrade football stadium during a Euro 2016 qualifying soccer match between the two countries. The drone carried a flag of "greater Albania," and a scuffle broke out when one of the Serbian players pulled it down, triggering a pitch invasion which saw the Albanian players flee into their dressing room. The match had to be abandoned.

Rama had originally been scheduled to travel to Belgrade the following week, but postponed the visit over that incident.

Despite Monday's discord, Vucic told reporters that the two rivals, both of which are keen to join the EU, "will continue talking."

Rama's visit to Belgrade was the first by an Albanian leader since 1946.

The first meeting between Albanian leader Edi Rama and Serbian premier Aleksandar Vucic ended in an uproar. There's a way to prevent that from happening again, says DW's Dragoslav Dedovic. (11.11.2014)

Albania's Prime Minister Edi Rama: 'The past cannot hold us back'

At their most recent football match in Belgrade riots broke out between Albanians and Serbians over a propaganda banner. Albania's Prime Minister Edi Rama told DW that both countries want to look forward together. (22.10.2014)