For years people have been knowingly or unknowingly consuming goods made by millions of forced workers worldwide. Now, technology is forcing them to reflect on their choices by exposing their complicity in slavery. 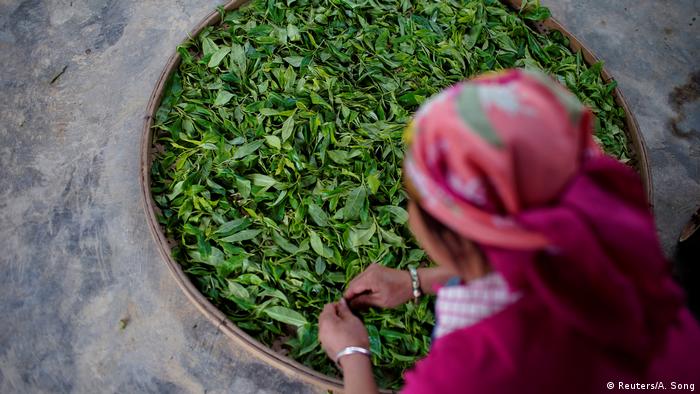 "A child in Africa has to die so that someone can have a mobile phone; a child in Asia has to die so that you can put on the next fancy dress," said Sophie Achieng Otiende as the audience — many of them students — in a jam-packed Davos middle school auditorium listened with rapt attention.

As a survivor of trafficking, the Kenyan knows the horrors of forced labor all too well. Otiende was forced to work as a house help by her uncle and his family. She was subjected to physical and sexual abuse just about every day for nearly 10 years — an ordeal that pushed her to the brink of suicide.

Fortunately, Otiende's resilience trumped her suicidal instincts and she managed to break the fetters of servitude. Today, she works at Nairobi-based NGO Awareness Against Human Trafficking (HAART Kenya), where she works with other survivors to instill in them the belief that "they too can live a full life."

Otiende survived, but there are an estimated 40 million people — some human rights groups put the number at a staggering 200 million — who remain enslaved across the globe, many of them toiling to make that cheap pair of jeans that we wear or catch the fish that lands on our dinner tables.

James Cockayne, director of the Centre for Policy Research at the United Nations University, says modern slavery is "a result of market failure."

"It's a result of us not pricing in the true social costs of the way we run our economies and our lives," Cockayne told DW. "It means we are not really thinking about the long-term social impacts of our illegal labor exploitation."

Modern slavery is prevalent in almost every country, irrespective of the level of economic development. Of the 40 million victims of modern slavery, 25 million people are in forced labor while the rest are in forced marriage. Nearly three in every four victims are girls or women.

The primary method of enslavement by the private sector is debt bondage, where the victim is forced to use his or her labor to repay a loan. In most cases of modern slavery, the victims are made to sign illegal contracts, which are often flashed as an alibi when the authorities come knocking.

"We have built an ecosystem that promotes exploitation where it's profitable for people to abuse others," Otiende told DW at the WEF in Davos. "We are going to have to undo that system and think of a new system where people are actually important not because there is money in it but just because they are people."

Technology to the rescue

Experts say technologies such as Artificial Intelligence and blockchain can play a huge role in tackling the menace and there are already some green shoots.

Banks are finding ways to analyze their transactions data to spot signs of forced labor, which they say can help law enforcement agencies in identifying the perpetrators.

Hong Kong-based Diginex plans to use blockchain technology to help prevent the exploitation of migrant workers and promote ethical recruitment.

The University of Nottingham in the United Kingdom is using artificial intelligence to analyze satellite imagery to map regions most vulnerable to forced labor.

"Using those techniques we can more easily find the worksites where modern slavery is more likely to occur and that allows us to use our resources more effectively to help those people,” Cockayne said.

Armed with data, authorities are in a better position to punish the offenders. Cockayne cited the example of the Norwegian Sovereign Wealth Fund and how it divested in 33 palm oil companies after it was found they relied on illegal labor supply chains.

Activists caution against assuming that technology is a quick fix to the problem. They point to the fact that most of the technologies are being developed and used in the developed world, where modern slavery is not as prevalent as it is in the developing countries.

How many slaves work for you?

While governments are doing their own bit, experts say consumers — unknowingly complicit in slavery — can play a key role in eradicating the menace of servitude by keeping a tab on their slavery footprint.

There are many websites and applications that help users find out how many slaves are working for them or how many "slave hours" are needed to support their lifestyle. The websites analyze the products the users own and consume and their supply chains to come up with their slavery footprint.

"Just as we ask what's my carbon footprint, we need to ask what's my slavery footprint," Cockayne said. "We need to be asking the same question from all the businesses we rely on. So, when we buy a pair of jeans; was that made with forced labor, when we buy pet food to give to our dogs and cats; does that include fish that was caught by people who were enslaved on fishing vessels in the high seas. We need to do a lot more to understand our own slavery footprint before we start to tackle the problem."

Close up - Slavery in Italy - Yvan Sagnet's fight for farmworkers

Thousands of young people move from the Nigerian state of Benue in the east to the country's southwest every year. They are promised a good education and well-paid jobs. But they end up in modern slavery. (30.10.2017)

Although bonded labor was outlawed in Pakistan years ago, the practice has continued, and even expanded, in the country due to a worsening economic crisis. Ansar Ali is one such farmer stuck in the perpetual debt trap. (25.12.2019)