The EU Eastern Partnership Summit in Vilnius could have been a turning point for Eastern Europe. But Moscow's pressure on Ukraine has raised questions about the future ties between the six countries and the EU. 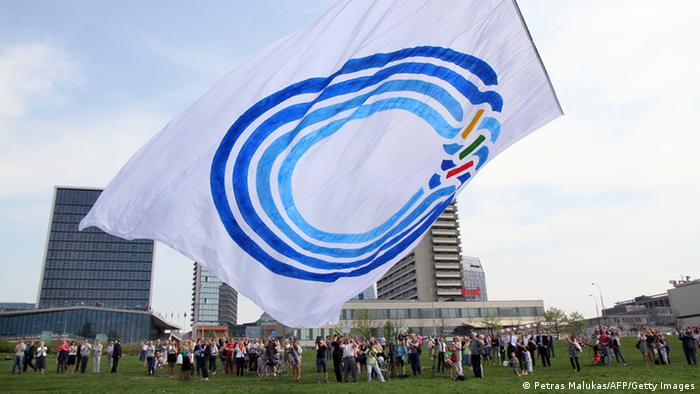 The high hopes the European Union had for the forthcoming Vilnius summit seemed likely to be dashed. Six former Soviet republics were expected to formally adopt Association Agreements with the 28-member bloc, offering them close ties to the EU as a precursor to eventual membership. But Ukraine's last-minute announcement that it would not sign, following Russian arm-twisting, has left the outcome of the meeting uncertain.

Leaders or senior policymakers from Ukraine and its Eastern European neighbors Belarus and Moldova, along with the Southern Caucasus states of Armenia, Azerbaijan and Georgia, will travel to the Lithuanian capital. All six states are members of the EU's Eastern Partnership, an initiative that began in 2009 as a forum for discussions of economic and other issues between the EU and its eastern neighbors.

Kyiv under the boot

But without an Association Agreement for Ukraine there will be no main event at the third Eastern Partnership summit. Ukraine is by far the largest and most populous of the six. Kyiv received the most extensive financial help - according to official data, nearly half a billion euros between 2007 and 2011. That is twice the aid for Moldova and three times that for Georgia - and the aid for Ukraine has steadily been increasing.

In 2011 Ukraine was the first country to finish negotiations on an Association Agreement, which would offer it tariff-free access to the EU, the world's largest free-trade area. But then the conviction and imprisonment of former Prime Minister Yulia Tymoshenko and the charges filed against other opposition politicians outraged EU leaders. The EU delayed the agreement, first to 2012, and then to this year.

Vilnius was supposed to be the end of that process. But just one week before the summit, Kyiv gave in to pressure from Moscow, announcing it was shelving preparations to finalize the agreement. The relevant ministries were instead instructed to "have an intensive dialogue with Russia and the countries of the customs union."

Russia has proposed expanding its customs union with Belarus and Kazakhstan into a Moscow-dominated "Eurasian Union" - but until now this had drawn little interest from any of the former Soviet states Russia had hoped to herd into it. In contrast, an October GfK poll in Ukraine showed nearly half of Ukrainians in favor of the Association Agreement - three times as many as the number who wanted to join the customs union.

Moldova has now taken Ukraine's place as the most promising Eastern Partnership country. Chisinau wants its Association Agreement to be signed before Jose Manuel Barroso steps down as president of the European Commission in 2014. The EU has hailed Moldova's reforms, saying its democracy is solid - unlike the other countries of the Eastern Partnership. 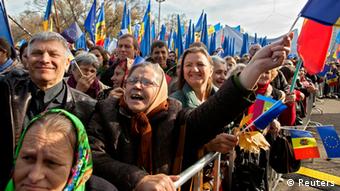 Annexed from Romania by the USSR in 1940, Moldova is one of Europe's poorest states

Two weeks before the summit, Barroso made a surprise announcement that the European Commission would ask the European Council to abolish the visa requirement for Moldovan citizens. Moldovans would thus be the first of the Eastern Partnership citizens to be able to travel to the EU without restrictions.

It was an example of the "more for more" principle: The more reforms a country carries out, the more it gets from Brussels. Granted, the impact would be limited due to the fact that many Moldovans already hold Romanian citizenship, but the gesture was more than symbolic, as the other countries will now expect the same.

Georgia is on a European course, but

In its zeal to build ties with the EU, Georgia has not been far behind Moldova. Tblisi also wants to come away from Vilnius with firm plans for an Association Agreement next year.

But whether Georgia can integrate with the EU as quickly as Moldova depends heavily on its internal politics. Brussels advised the new Georgian government not to follow Ukraine's in persecuting opposition leaders. Observers say the Association Agreement between Georgia and the EU could be in peril if former president Mikheil Saakashvili is jailed.

The country also has troubled, but improving, relations with Russia, with which it fought a war in 2008. Since then, Russia has recognized the breakaway Georgian regions of South Ossetia and Abkhazia as independent countries - even if it has been unable to persuade many other countries to follow suit.

The fourth country that was to sign an Association Agreement with the EU was Armenia. Last summer Yerevan and Brussels concluded the negotiations and Armenia - like Georgia and Moldova - planned to sign the agreement at the summit. 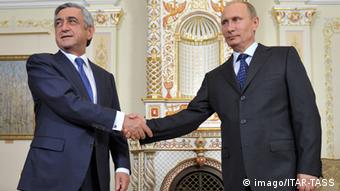 But in early September, Armenian President Serzh Sarkisian had a private meeting with Russian President Vladimir Putin, which was quickly followed by a volte-face. Armenia announced a desire to join the Russian customs union instead.

Azerbaijan, Armenia's sworn enemy since the two sides fought a war over the Nagorno-Karabakh region 20 years ago, does not want to join the customs union with Russia. But nor does Baku plan to sign an agreement with the EU in Vilnius.

Relations between Azerbaijan and Europe are dominated by gas. In June 2013 the consortium exploiting the vast Shaz Deniz gas field announced it would build the Trans-Adriatic Pipeline, which would bring Azerbaijani gas to the EU while bypassing Russian territory.

This might be the reason the EU invited Azerbaijan's President Ilham Aliyev to Vilnius despite the country's dismal human-rights record and the widespread European condemnation of vote-rigging in its recent presidential elections. But this criticism may have had one effect - it is not clear if Aliyev will actually come to the summit.

Alexander Lukashenko, the authoritarian president of Belarus, a country whose human-rights record is arguably even worse than Azerbaijan's, was a no-show at the Warsaw Summit two years ago. Unsurprisingly, he will not be coming to Vilnius. Only a representative of the Belarusian foreign ministry will be there.

Belarus is the only member of the Eastern Partnership program under EU sanctions, due to its holding of political prisoners and lack of "respect for human rights, the rule of law and democratic principles." Numerous high officials are banned from traveling to the EU. Experts doubt these sanctions are having much effect, not least because of the important role Belarus plays as a transit country for Russian pipelines.

But some European politicians want to use the summit in Vilnius to smooth things over with Belarus. Relations between Lukashenko and Putin have been frosty, and the two countries have quarreled on several issues, notably Belarusian gas debts. Belarus also publicly refused to recognize South Ossetia and Abkhazia.

Such opinion polls as exist in Belarus have shown support growing for closer ties with the EU among Belarusians. But an Association Agreement, or anything like it, is unimaginable under the country's current regime.

As protests in Ukraine continue after the failed European Union accession negotiations in Vilnius, a German expert describes the local situation and discusses the missed opportunity. (01.12.2013)

Politicians in Kyiv are endangering their country's European future, says DW's Bernd Johann. Ukraine has succumbed to Russian pressure and given the European Union the cold shoulder. (22.11.2013)