The African Union has suspended Sudan's participation in activities until the restoration of a civilian-led authority. The World Bank has also suspended funding as the military becomes more internationally isolated. 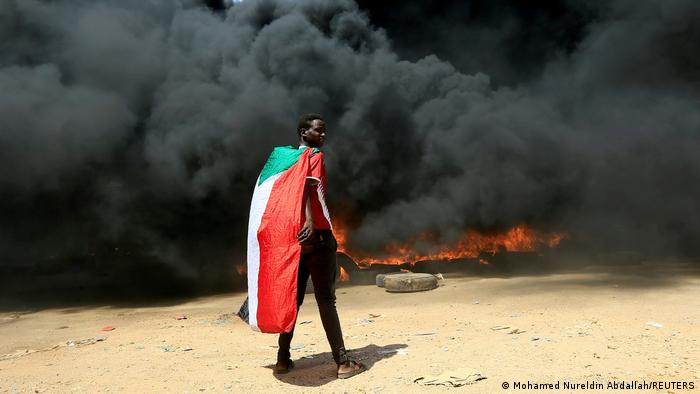 The African Union (AU) on Wednesday suspended Sudan from all its activities until civilian rule is restored in the country.

The continent-wide bloc said it "strongly condemns the seizure of power," branding it "unconstitutional."

It said Sudan would be suspended from all AU activities "until the effective restoration of the civilian-led transitional authority."

Sudanese General Abdel Fattah al-Burhan had on Monday ordered the dissolution of the government and declared a state of emergency. Since then, thousands of citizens have mounted protests, chanting "No to military rule."

Included were Sudan's ambassadors to the United States, the European Union, China, Qatar, France and the head of Sudan's mission to Geneva.

Earlier Wednesday, the EU Delegation to Sudan made a joint statement that also included Switzerland and the so-called "troika" of countries involved in mediation — Norway, the US, and the UK.

It condemned the military's actions, but welcomed the fact that coup leaders had allowed Prime Minister Abdullah Hamdok to return to his residence

Also on Wednesday, Germany's Foreign Minister Heiko Maas called the coup a "catastrophic development" and condemned it "in the strongest possible terms."

Hamdok was detained Monday along with his ministers and civilian members of Sudan's ruling council. He returned to his residence on Tuesday.

The EU statement demanded that signatories' ambassadors be allowed to meet the prime minister and his cabinet, saying it recognized them as constitutional leaders.

Later Wedesday, the UN reported that envoys from France, Germany, Norway, the UK, the United States, the European Union and the United Nations met with Hamdok at his residence and reported he was in good health.

Amid international condemnation of the coup, the World Bank said on Wednesday it would suspend disbursements for operations in Sudan in response to the military's seizure of power.

"I am greatly concerned by recent events in Sudan, and I fear the dramatic impact this can have on the country's social and economic recovery and development," World Bank President David Malpass said in a statement from Washington.

In March 2021, Sudan had gained access to $2 billion in financing after years of isolation during autocratic rule.

What is the current situation in Sudan?

The prime minister and his wife were returned home "under close surveillance," Hamdok's office said Tuesday. However, other ministers and civilian leaders remain under full military arrest.

Hamdok's return did little to appease protesters who had backed the planned transition to civilian rule.

Their demonstrations continued on Wednesday, despite security forces making several arrests and tearing down makeshift barricades in Khartoum.

A doctors' group said four people were killed on Monday when soldiers opened fire on protesters.

Internet services have been blocked with shops around the capital closed after calls for a campaign of civil disobedience.

The Sudanese Professionals Association (SPA), a group of unions that was instrumental in the protests against Bashir has also urged "million-strong protests" on October 30.

Sudan's Khartoum airport, which has been closed to flights, was set to reopen on Wednesday afternoon, according to the country's civil aviation authority.

What is the background to the Sudan coup?

The coup followed a two-year transition outlined in a power-sharing deal agreed in August 2019 between the military and civilians.

This followed the ouster of autocrat Omar al-Bashir on the back of mass protests against his rule.

Sudan had found itself isolated after nearly three decades of isolation under Bashir, and it remains one of the world's most underdeveloped countries.

In particular, it fell into pariah status as Washington imposed tough sanctions on Bashir's regime for sheltering Islamic extremists, including al-Qaeda leader Osama bin Laden, in the 1990s.

The African Union suspended Sudan in June 2019 after pro-democracy protesters were gunned down outside army headquarters in Khartoum.

Membership was reinstated 3 months later after Hamdok announced the appointment of Sudan's first cabinet since the ousting of Bashir.

New strongman Burhan has pledged to hold elections as planned in July 2023. In the meantime, a technocrat government would be appointed.

Sudan has experienced only rare democratic interludes since independence from Britain in 1956.

The Sudanese military has launched a coup attempt against the country's government — even though military officials were already part of that same government. It risks losing crucial international and local support.