African Swine Fever: Is China downplaying another disease outbreak? | Asia | An in-depth look at news from across the continent | DW | 17.09.2021 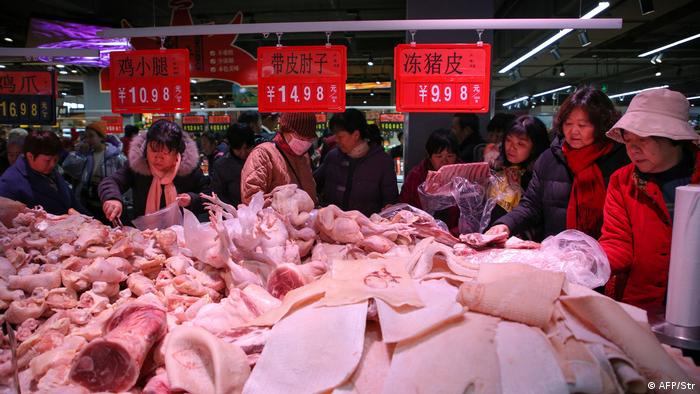 During a teleconference more than two years ago, Chinese Vice-Premier Hu Chunhua urged health authorities to step up efforts to rein in a growing outbreak despite initial "positive results," and suggested that "enhancing quarantine and monitoring" measures would help prevent the spread of the virus.

Hu's comments came before the discovery of SARS-CoV-2, the virus that causes COVID-19. Instead, he was referring to a different, far deadlier disease: African Swine Fever (ASF) — an illness that affects pigs.

Chinese officials first identified ASF in 2018 in Liaoning, a coastal province in China's northeast. Unlike SARS-CoV-2, ASF does not threaten human health. The disease, however, is highly virulent in pigs and mortality rates approach 100%.

ASF is of particular concern in China, the world's top pork consumer and home to roughly half of the world's pigs. Given the country's enormous pig population, ASF could turn China into a significant reservoir of disease and pose a threat to China's neighbors in the region if it becomes endemic.

This year, China reported 12 ASF cases to the OIE, the intergovernmental body that tracks animal diseases, down from a high of 105 in 2018. Except for a small bump in cases earlier this year, ASF numbers have consistently declined, according to official figures.

Some industry experts, however, believe that China may be obfuscating African Swine Fever's actual toll on hog herds by under-reporting infection numbers, and painting an artificially rosy picture.

The cost of pork in China is an economic bellwether. Tapping into China's strategic pork stockpile allowed Beijing to stabilize pork prices from a high last year, but ASF could still cause headaches of epic proportions.

A report by the Asian Development Bank estimated the outbreak's economic cost in China last year at $50 to $121 billion (€42.5 to €103 billion) with a minimum loss of 25-55% of Chinese pig herds since 2018. The report also said ASF threatens "increases in poverty, vulnerability, and food insecurity" and poses a "substantial" risk to climate change resilience and human health.

Measures such as vigilant herd monitoring and the culling of pigs that exhibit ASF symptoms could help to contain China's current outbreak. But containing ASF in China is not an easy task.

Smallholder pig farming, defined as backyard farms of 50 pigs or less, is an economic safety net or significant source of income for tens of millions of Chinese, and accounts for nearly a third of national pig production. But the practice may be driving China's ASF outbreak.

Many smallholder pig farmers rely at least in part on swill — food scraps and kitchen waste — to feed their hogs. While swill is an economical source of fodder, biosecurity or food safety standards are not always reinforced.

If ASF is suspected locally, some farmers could sell off pigs before herds exhibit the disease, helping disseminate the lethal virus more widely throughout the country.

Linda Dixon, an ASF expert at The Pirbright Institute, an infectious disease research group, said that due to the complexity of ASF, it has proven "very difficult to make a vaccine that's effective" against the disease.

Although there are several ongoing ASF vaccine trials, a commercialized vaccine is at best "one to two years away" if current prototypes prove safe and effective, she said.

Paul Sundberg, the Executive Director of the Swine Health Information Center, said there might even be vaccines in use in China that prevent some pigs from dying, but "cause low-level infection." Ultimately, these mystery vaccines make controlling the disease "more difficult."