Women on the web

African, female, with a message online

Feminism, political inclusion and sexuality were all buzz topics this year. But are African women making full use of online spaces? DW speaks to three digital natives. 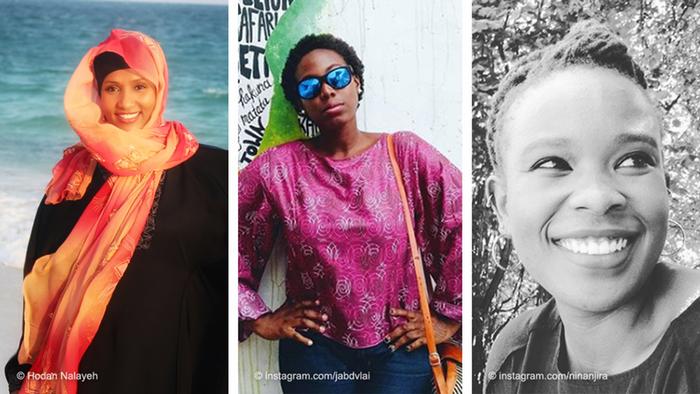 Dissolve parliament or act on our petition. That was the essence of a petition to Kenya's Chief Justice David Maraga that made its rounds online. This time it wasn't the opposition questioning the legality of Kenya's parliament. It was Kenyan women – the underrepresented part of the population. The 52 percent.

Since the most recent parliamentary elections in August 2017, 23 percent of Kenya's parliament is made up of women – for comparison, in Germany it's 30.7 percent. It's a step forward, and not an abysmal result until you look a little more closely. Nearly half of these women were elected as women representatives and Kenya's constitution actually requires that at least one third of all parliamentarians are women. Moreover, when it comes to women representation in parliament, Kenya, still lies behind fellow East African countries like Uganda, Rwanda and Tanzania.

For Kenya, the #WeAre52pc campaign is not unusual. Political campaigning happens online as well as offline. Politicians are online, businesses, NGOs, just about everyone who lives in an urban environment and wants to make a name for themself is on Twitter, Facebook and other social media platforms. "People in power have realized that this is a space that they cannot ignore. So maybe they will not listen every day, but they have a presence and someone on their team will make it known to them that this is an issue," explains Nanjira Sambuli, a digital equality advocate at the Web Foundation which was founded by the World Wide Web inventor Tim Berners-Lee.

Hashtag warriors. That's what the people are called who campaign for a cause on Twitter and Facebook, where the message spreads in seconds and sometimes a celebrity or politician gets wind of it. Probably the most famous example was the #BringBackOurGirls campaign, which got the attention it deserved when former US First Lady, Michelle Obama, posed for a photo with the message. It was the most tweeted hashtag to date, but out of the 276 Nigerian school girls who were kidnapped, 113 are still missing.

There were others: the #MeToo hashtag trended worldwide after revelations of sexual harrassment in Hollywood; #MyDressMyChoice, which was picked up by a suburban Kenyan mom's group after a video of a woman being stripped in public because her hemline was allegedly too high, was shared online; or #StopRacismAtPretoriaGirlsHigh, where black school girls protested against the requirement to straighten or tame their natural afro hair.

The campaigns are often short-lived, but they start conversations, catch the attention of leaders or people with the ability to act upon them and they connect people who suddenly realize that they are not alone with their problems. The three men involved in the mini-skirt case actually received the death penalty for their acts – although they are more likely to serve a life sentence.

"We're at a juncture," is how Jemila Abdulai describes it. She runs a Ghana-based blog called Circumspecte.com, and although she's doesn't blog for a female-only audience, she often finds herself interviewing female entrepreneurs and interacting with fellow "web-savvy" women. "There's the traditional role of women in Ghanaian society and the new life models. There's the constitution that guarantees equal rights for men and women and there's real life, where it just take a while for things to develop," Abdulai told DW.

And it's not only the parliaments and the societal structures that sometimes lag behind. The web too is not the equalizer it is often claimed to be. "Our research shows that the offline inequalities are replicated online," explains Sambuli from the Web Foundation. According to her, women in urban, poor communities around the world are 50 percent less likely to be online than men. Women are also less likely to utilize the tools available online to bring about changes in their lives and empower themselves. Older people are another demographic that is less likely to use digital platforms, as they feel it's a space for young people.

"I think the biggest issue that we have as Somali women, is a lack of confidence," says Hodan Nalayeh. She says she was absolutely terrified when she first started her Youtube Channel,Integration TV.

Her channel, accompanied by the usual array of social media platforms, tells stories about the Somali communities around the world. It's the Somalia, that we rarely see, the normal life away from the bombings, and stories of war and famine that reach the outside world.

"When the young girls look at you, they have this shock that here you are, bold, you're talking. I don't think that women in our country and our culture have been given that confidence to have dreams, goals and aspirations," Nalayeh told DW.

What becomes clear when speaking to various African bloggers, is that most of the women have not set out to blog or speak for a female audience. The concern is often about shaping the "African" narratives.

"I think we need to look at our definition as women and what makes a woman great. I think that as Somali women, it's the strength, the ability to overcome so much hardship. And our ability to teach our children to accomplish more in this world," says Nalayeh.

Should you ever feel slightly light-headed after a session of browsing around the great ideas and inspirational speakers of the web, then look no further than the comment section and you will quickly come back to earth.

Sexism, racism, trolling – they're all down there in the comment section, just like in real life, with the difference that the people behind them can hide behind their online profiles. Women are often reduced to their sexuality, especially if they speak about controversial topics and are active in politics, says Abdulai.

"It's very painful," admits Nalayeh. People say things that hurt your feelings and they don't appreciate the time and energy that you invest in the work, she says. How does she deal with it? By focusing on her own goals and aspirations rather than on what others are demanding of her.

There are tools and safe spaces online, says Abdulai. To some extent, you can control who you come into contact with online through the groups you're part of and who you choose to follow, she says.

There's still an element of vulnerability if you are very vocal as a woman online, says Abdulai. She noticed that even on her website, men were more likely to comment. The women, she says, would write her a private message or perhaps discuss it with her when they see her in town.

Private groups or forums, for instance, are often forums where women exchange views more openly, without fear of repercussions. And in many cases these are also relationships that venture offline – to meet-ups at events, to a network of people that support each other when they start-up their businesses or promote a common cause.

If what you're facing online is taking a toll on you, try to ignore or take time off, but don't allow this to push you out of this [online] space completely, says Sambuli. Her aim is to make the digital world more inclusive. "It's the fascinating thing about women's communities online," she says, "they support each other, wherever they are in the world."