The #MyDressMyChoice campaign began after a woman was brutally assaulted outside a Nairobi bus stop for wearing a miniskirt. Protesters took to the streets Monday in support of the victim. 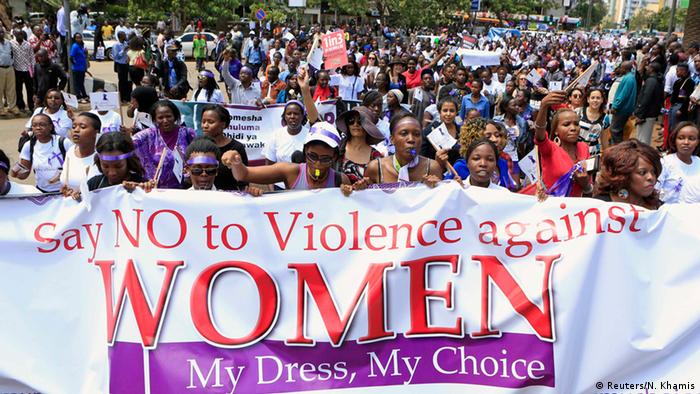 Thousands of protesters gathered in Nairobi Monday to rally in support of a woman who was assaulted and stripped by a group of men last week. The attackers accused the victim, who wore a miniskirt, of "tempting" them because she was wearing "indecent" clothing. The incident was captured on a video that was published on YouTube.

The video has since been removed from YouTube, but it has caused an uproar in Kenya where thousands have taken to social media using #MyDressMyChoice in support of the victim. The #link:https://twitter.com/hashtag/MyDressMyChoice?src=hash:MyDressMyChoice# hashtag had been mentioned more than 50,000 times by 3:30 PM (UTC), #link:http://topsy.com/s?q=%23MyDressMyChoice:according to Topsy#.

There are many incidences in which women are stripped in public for allegedly wearing indecent clothing, according to Wambui Ngige who started the #MyDressMyChoice campaign.

"This specific event caught the attention of everyone, since it was captured on video and uploaded online, but these incidents happen very often throughout Kenya," Ngige, a women's rights activist with the FLONE Initiative, told DW. "This time we decided not to be quiet about it anymore, we had to do this campaign once and for all."

On Monday, protesters gathered at Uhuru park in Nairobi's city center holding banners that read, "My dress, My choice." Other women wore miniskirts in support of the attacked woman. Kenya's deputy president, William Ruto, has ordered that #link:http://www.aljazeera.com/news/africa/2014/11/2014111710237506108.html: the attackers be arrested and an investigation launched#.

Meanwhile, police said they cannot take any action because the victim did not file a complaint. So one of the main purposes of the march was to convince police and Kenya's president will publcly condemn the criminal and brutal acts, says Ngige.

"A woman in Kenya should have the right to dress however she wants," she explains. "This is part of our constitution."

Another rally, in response to two stripping incidences, is planned for November 24. According to Ngige, although some voices in the country are identifying with the attackers, calling on women to dress more "modestly," many men are taking part in the campaign, carrying signs and calling for an end to violence against women.

And social media has been helping to raising awareness about the campaign.

"We started on Facebook and later on went to Twitter, and it immediately became viral," Ngige says. "With the pressure coming from social media, we hope the president would have to react, and that something will be done finally."